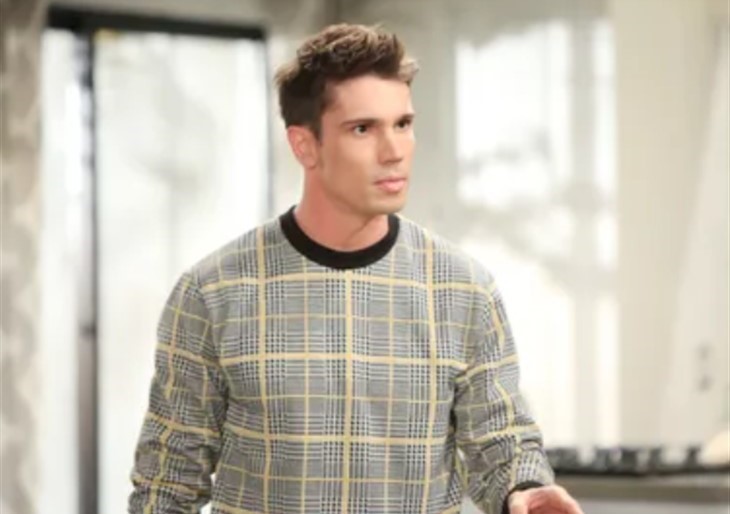 The Bold and the Beautiful (B&B) spoilers tease that in Los Angeles John Finnegan (Tanner Novlan) is projecting an understandable, but also potentially troublesome level of aggressiveness. Finn’s love for Steffy Forrester (Jacqueline MacInnes Wood) is unquestioned. But his feelings are conditioned on his belief that she won’t make another mistake with Liam Spencer (Scott Clifton).

Finn can likely stay in the show indefinitely as long as he lives up to his promise to Steffy. He loves her and the baby that she’s having, while viewers assume that a paternity flip will see Finn become the dad.

However, Liam’s presence in Steffy’s life won’t cease. That will lead to many ongoing conflict opportunities.

The Bold And The Beautiful Spoilers – John Finnegan Maintains Stability?

A very telling bit of dialogue took place between Novlan and Clifton. During a contentious exchange at Spencer Publications Finn told Liam that he’s not sure that he’ll be able to look at Steffy’s baby without thinking about all that’s happened.

Viewers felt a chill when that statement was made because Finn was questioning his own ability to separate his negative feelings toward Liam from those who are connected to him. Novlan’s character followed that exchange by later telling Steffy that he would love the baby because he or she was part of her.

Liam isn’t waffling on this issue, as he has between Steffy and Hope Spencer (Annika Noelle) through the years. When challenged by Finn to look him in the eyes and admit, man to man, that he was wrong Liam did just that.

The tell to Finn, that he had been wronged, wasn’t satisfying, however. That was another point in the plot that appeared to telegraph these rivals either eventually coming to physical blows or Finn will direct his negativity elsewhere.

Assuming Liam is stripped of paternity status, Finn will be overjoyed. He’ll surely be able to tolerate Liam to a much greater degree in that scenario, as opposed to having the storyline continue as it is indefinitely.

The Bold And The Beautiful (B&B) Spoilers: Hope’s Heart Shattered No Coming Back For Liam Regardless of Paternity Test Truth https://t.co/nybQLkqid6 pic.twitter.com/1Asw1xXBXh

Steffy was disturbed when learning that Finn went to confront Liam. She’s not used to that type of response, outside of Thomas Forrester’s (Matthew Atkinson) badgering of Liam prior to brain surgery altering his perspective and approach to life.

Finn felt compelled to draw a line in the cliff house sand by telling Liam exactly what he thought of him and in noting that he’s set rules where Steffy is concerned. But Steffy, along with B&B fans, sense danger ahead. Anything becomes possible if Finn believes, at any point, that Liam is taking further liberties.