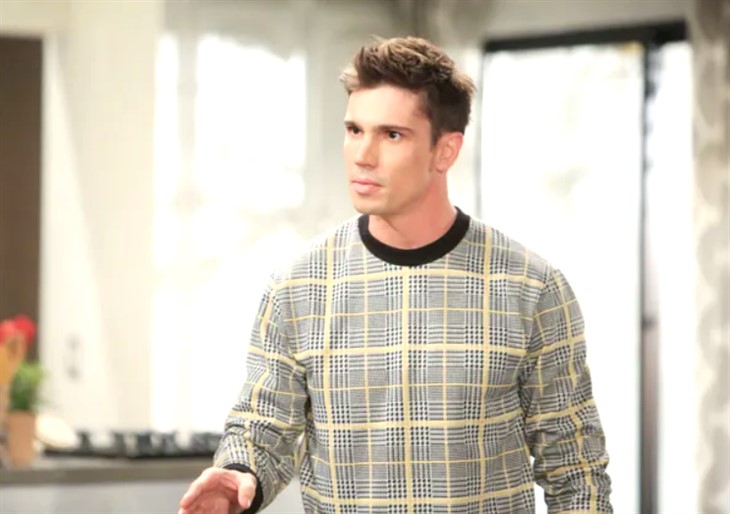 The Bold and the Beautiful (B&B) spoilers for Friday, July 30, 2021, reveal in Los Angeles Finn getting quite the surprise when an unexpected family member arrives.

The Bold And The Beautiful Spoilers – The Family Finn Needs?

Finn (Tanner Novlan) had just finished telling Steffy (Jacqueline MacInnes Wood) that he was going to call his parents and invite them to LA soon, but wasn’t quite ready to do it yet. She said she understood and then the pair almost made love just weeks after she had a baby. On Friday, Finn’s father shows up and he’s played by soap opera veteran Ted King. We may also get to know more about the good doctor than we ever knew before.

But what prompted this? Did Steffy call him behind Finn’s back and perhaps Ridge (Thorsten Kaye) decided to stick his nose where it doesn’t belong? Perhaps they thought Finn would like this. Or maybe his dad just decided to visit and is shocked to learn he has a grandson and future daughter-in-law. What is Finn trying to hide? Will we learn something about his parents that he never wanted anyone to know?

Quinn (Rena Sofer) had a lot to say to Eric (John McCook) on Thursday and much of what she said made sense. Eric couldn’t forgive her for doing things that Brooke (Katherine Kelly Lang) has done. He always took Brooke’s side over hers and she was lonely and rejected so she turned to Carter (Lawrence Saint-Victor) It wasn’t a plan. It just happened.

But now Carter and Quinn have quite a thing going and Carter’s guilt is getting the best of him when Eric wants to talk. Eric has been so good to him for years and he really has no reason to hurt the man, but he can’t stay away from Quinn. Will he tell Eric he has to live his own life and be with the woman he wants to be with or will he continue to see Quinn behind Eric’s back? And will Eric realize he may have had a part to play in the demise of his own marriage? Sometimes men just can’t seem to admit the truth about themselves. Stay tuned to The Bold and the Beautiful weekdays to see how these stories play out.