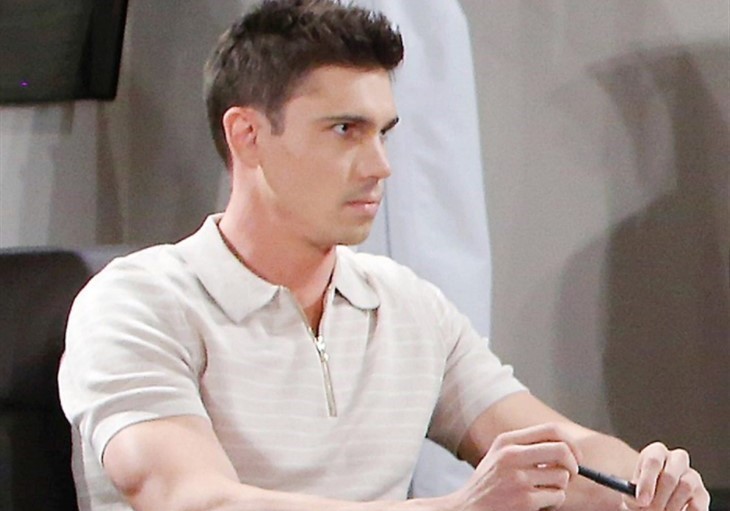 The Bold and the Beautiful (B&B) spoilers for the week of March 8 reveal that John “Finn” Finnegan (Tanner Novlan) doesn’t care what the paternity test says. He is determined to be the father of Steffy Forrester’s (Jacqueline MacInnes Wood) starting right now. He bans Liam Spencer (Scott Clifton) from the prenatal appointments. Will he convince Steffy her ex is a deadhead dad?

The Bold And The Beautiful Spoilers – John Finnegan Takes Control

B&B spoilers reveal that Finn has never liked Liam hanging around Steffy so much. It’s been an issue since “Sinn” first got together. There have been times when Finn has been firm with Liam. However, we are seeing his anger escalate. Knowing that another “Steam” baby will bring Liam and Steffy closer, Finn takes action so he’s the only man in both the unborn baby and Steffy’s lives.

In the new issue of Soap Opera Digest, it is stated that Liam intends on being there for Steffy every step of the way. Not only does he want to be an active father in the child’s life, but plans on going to every prenatal appointment and being in the delivery room. Finn has a real problem with this and starts scheming to distance Liam from Steffy and the unborn baby.

The Bold and the Beautiful spoilers reveal that Finn could tell Liam that he’s banned from Steffy’s prenatal appointments. He might claim that Steffy doesn’t want him there or that it’s too stressful for her. Another possibility is that Finn gets forceful and threatens Liam. He doesn’t want Liam bonding with the baby and certainly doesn’t want another child bringing “Steam” closer. He considers himself to be the baby’s father and takes drastic action to protect his “family.”

If Steffy knew that Finn was threatening Liam or trying to keep him from his child, Steffy would put her foot down. She understands it’s a complicated and stressful situation. She predicts there will be battles between the two men. However, it is very important for Steffy that Liam be an active part of his children’s lives. She would never allow Finn or anyone else to interfere in the father/child relationship.

Finn likely won’t tell her that he banned Liam from the visits. He might shrug his shoulders and pretend he doesn’t know why Liam isn’t showing up. Or he could outright lie and try to convince Steffy that Liam’s a deadbeat dad… and that who’s with her throughout the pregnancy is the “real father.” But eventually, Liam and Steffy are going to talk, which Finn can’t prevent. The truth will come out, which will make Steffy furious. How will she handle Finn’s overstepping and stopping Liam from being part of his baby’s life? Will “Sinn” break up, could she set him straight, or will he become even more devious?