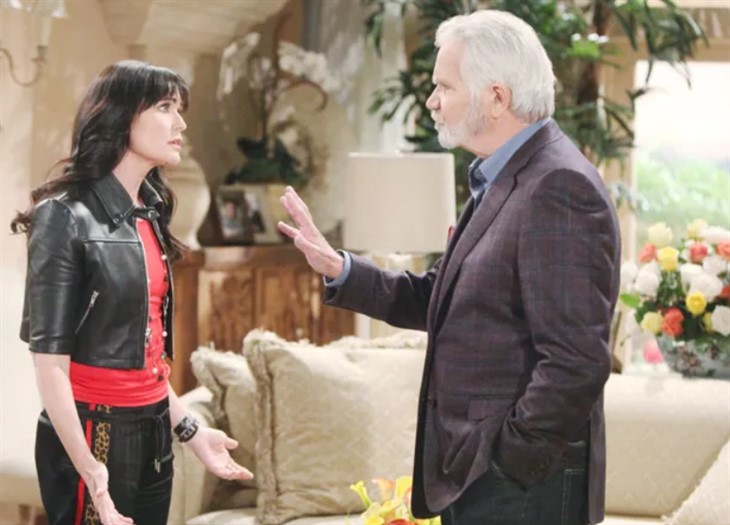 The Bold and the Beautiful spoilers for Monday, July 5, 2021, reveal in Los Angeles a furious Eric showing Quinn the door.

Quinn (Rena Sofer) thought she was going to get away with cheating on her husband. A few threats here, a vow renewal there and all would be fine. What she didn’t count on was her own loud mouth and the woman she wronged a year ago who has been itching to bring her down for as long as she can remember.

Brooke (Katherine Kelly Lang) took Quinn’s fantasy life and destroyed it when she revealed that Quinn and Carter (Lawrence Saint-Victor) had an affair. And she did it in grand fashion too, walking in on the vow renewal and telling Eric everything just as Quinn did when Brooke kissed Bill (Don Diamont) and then tried to renew her vows with Ridge (Thorsten Kaye).

Sadly, Brooke (Katherine Kelly Lang) also hurt poor Eric (John McCook). And Eric is more than hurt. He is angry and he lets Quinn know it in dramatic style. Quinn is the one who put their marriage in a precarious situation with her schemes and lies and yet he chose to forgive her over and over again. Even when she nearly ruined Ridge’s life, he took her back and loved her enough to want to renew his vows. And she went into this with an affair hanging over them. Did she ever plan to tell him what happened? Is it really over between Quinn and Carter?

Carter is standing right there as the officiant for this vow renewal and may have to answer just that. Eric is furious at him too. He treated Carter like a son and this is how he betrays him. Eric can barely believe any of this is happening and frankly, neither can Carter as he loves Eric like a father and never wanted to hurt him.

Now, he is sure to lose Zoe (Kiara Barnes), as well as his job. And he does have to ask himself was it all worth it and does he truly have feelings for Quinn? Stay tuned to The Bold and the Beautiful weekdays to see how this story plays out.