The Bold And The Beautiful (B&B) Spoilers: Brooke Busts Quinn, But Damages Her Own Marriage 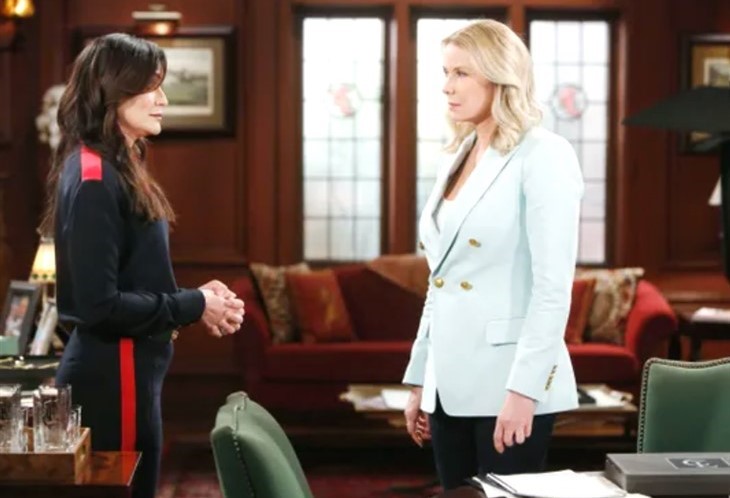 Brooke and Quinn’s rivalry is about to heat up again when Brooke discovers a secret about the Forrester matriarch. Of course, Brooke isn’t going to resist the ultimate opportunity to expose Quinn in a very public way.

Brooke’s actions will not only damage Quinn’s marriage to Eric Forrester (John McCook), but also impact her relationship with Ridge Forrester (Thorsten Kaye).

Unbeknownst to Eric, his wife has been fooling around behind his back. Quinn’s having an affair with family friend and Forrester Creations employee Carter Walton (Lawrence Saint-Victor). Quinn and Carter knew their affair was wrong, but they couldn’t deny the connection they had.

But the two realized there was no way they could be together, and ended their affair. Quinn is staying with Eric, while Carter has reunited with Zoe Buckingham (Kiara Barnes). With their secret safe, Quinn and Carter believe they’re scot free.

Yet, what they don’t know is Zoe’s sister Paris Buckingham (Diamond White). Paris is about to reveal the secret to Quinn’s arch nemesis.

This week Quinn and Eric plan to renew their vows. The couple has been through a lot over the years, including a few break ups. Recently, they hit another rough patch when they experienced intimacy issues. However, the two remain dedicated to each other and want to cement their love.

However, their wedding day isn’t going to be without drama, courtesy of Brooke. When she learns about Quinn and Carter’s affair, Brooke is going to expose them. And what better way to do that than during Quinn and Eric’s wedding.

Brooke’s revelation is going to cause plenty of chaos. With Carter there officiating the ceremony, he and Quinn will have lots of explaining to do once their busted. Meanwhile, Brooke will be pleased watching Quinn’s downfall from grace, however Ms. Logan will suffer ramifications too.

The Bold And The Beautiful Spoilers – Ridge Upset With Brooke Logan

Like the rest of the family, Ridge is going to be shocked when he learns of Carter and Quinn’s affair. His main concern is looking after his dad, who’ll be heartbroken over the betrayal. Aside from heartache, Eric will also feel humiliated at having this exposed in public.

With Eric going through a difficult time, Ridge will be upset with Brooke. Ridge isn’t Quinn’s biggest fan, and Eric had every right to know about the affair. However, Brooke went about telling the truth in the wrong way.

This is a personal matter, something Brooke should’ve discussed with Eric in private. Yet, she chose to broadcast it for everyone to hear.

Brooke will claim she was looking after Eric’s best interest, yet Ridge will be doubtful. Ridge believes the only reason she revealed the secret in a public way was to get back at Quinn. Brooke didn’t care about Eric’s feelings just as long as she humiliated Quinn. But it’s Eric who’ll suffer the most out of this situation.