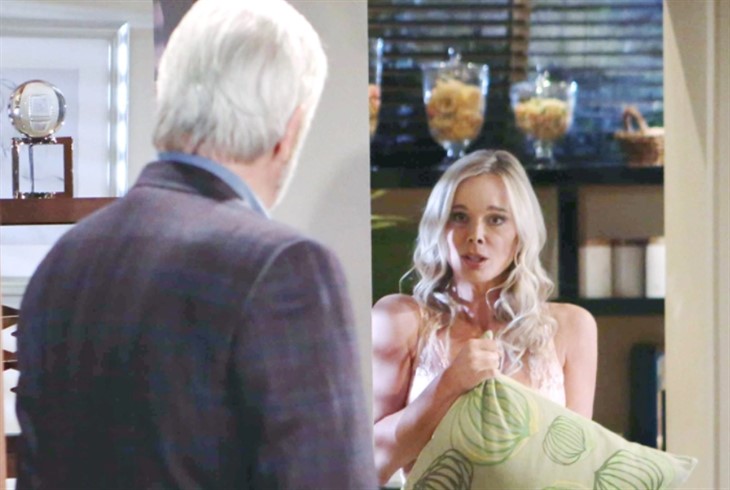 The Bold And The Beautiful (B&B) Spoilers indicate that Eric Forresters is about to have an in-depth conversation with former wife Donna Logan (Jennifer Gareis). Eric is having marital problems with his wife, Quinn Forrester (Rena Sofer), and needs someone to talk to. Will Eric and Donna reconnect over his marital issues?

The Bold and The Beautiful’s Quinn broke Eric’s trust when she manipulated his son, Ridge Forrester (Thorsten Kaye) into a divorce and subsequent marriage to Shauna Fulton (Denise Richards). Eric and Quinn have clashed over her interference time and again but this time it was his son she messed with. Ridge and Brook Logan Forrester (Katherine Kelly Lang) have been together on and off for years. Ridge and Brook always come back together and Quinn knew that. However, Quinn’s friend wanted a chance with Ridge and they made it happen. Quinn knew what would happen if the truth came out, but she did what she wanted anyway. Quinn has no one to blame but herself for her marriage woes. Eric just cannot see why Quinn can’t grant him one simple request.

B&B Spoilers – Eric Forrester Was Once Married To Donna Logan

Although The Bold and The Beautiful’s Eric’s children were against his relationship with Donna years ago, Eric married her anyway. Eric and Donna had a workable marriage for a while. Eric even adopted Donna’s son from an affair when she was a teenager. Eric and Donna may have divorced but they are still on friendly terms. Eric and Donna even still work together at Forrester Creations. Donna is easy to talk to and knows about most things going on with the family. Will Donna and Eric reconnect over Quinn’s betrayal of his family?

The Bold And The Beautiful’s Eric and Donna could try again. Both Eric and Donna are older now and have learned from their mistakes. Donna wouldn’t make the mistakes that Quinn has while dealing with Eric’s children. Donna has already made her mistakes and knows what doesn’t work. Would Eric take a chance on a relationship with Donna again? After all, Donna wasn’t exactly embraced by Eric’s children the last time.

Eric may love Quinn but he seems to be done with her lies and deceit. Is this the end for Eric and Quinn? Could Eric have a fresh start with someone who won’t undermind his family?

General Hospital (GH) Spoilers: Jason Is Still In The Center Of Carly And Sam’s Worlds – But Not Quite