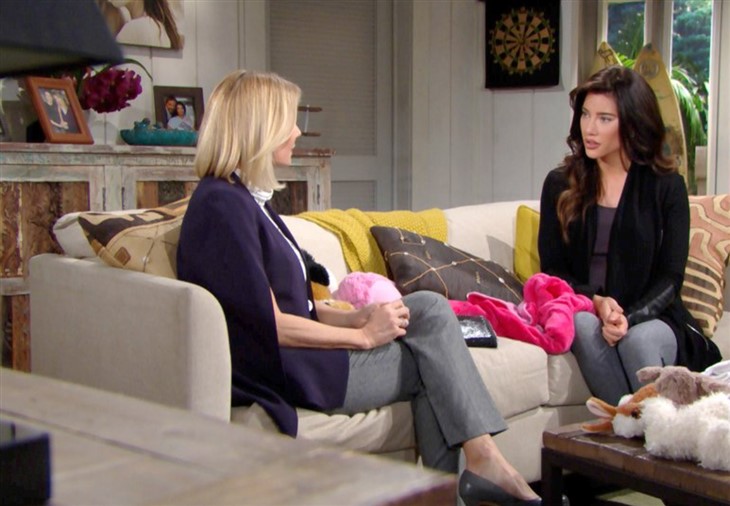 The Bold and the Beautiful (B&B) spoilers tease that in Los Angeles Brooke Logan Forrester (Katherine Kelly Lang) will enter the fray, as her involvement and influence in the latest baby drama starts. Hope Spencer (Annika Noelle) needs support and she will get that from her mother.

Brooke’s awareness of all that’s happened will create a focus on the roles that Steffy Forrester (Jacqueline MacInnes Wood) and Liam Spencer (Scott Clifton) have played in damaging Hope’s life. The wild card factor is Thomas Forrester (Matthew Atkinson), who traditionally has been a target of Brooke as well.

Brooke is a straight shooter. She will help Hope to clarify her feelings and develop a plan for what must come next.

Like everyone, Hope is waiting for the paternity test results. That outcome likely will be the difference-maker in her decision to either continue Lope, or to walk away.

The compelling advice Thomas offered to Hope was a watershed moment in the long arc that they’ve been working since 2019. Thomas sincerely told Hope to give Liam a second chance, which deeply affected her. The concern Atkinson’s character demonstrated creates the potential for a legitimate relationship to spark if Liam is the father of Steffy’s baby.

Brooke expected better from her son-in-law. After all that he and Hope went through to first restore their family and then to secure it, following the Thomas inspired drama, Liam has potentially thrown their victories away.

Liam has not been making excuses. He can’t blame Thomas for this one, but has chided the mannequin on more than one occasion.

Lang’s character will lay into Liam, fiercely and rightly defending her daughter from his latest boomerang back to Steffy. The potential impact of what’s happened on Beth Spencer (Madeline Valdez and River Davidson) and Douglas Forrester (Henry Samiri) will also be part of Brooke’s condemnation.

Hope didn’t let Steffy off the hook. She told her longtime nemesis that what happened at the cliff house represented Steffy’s latent desire to revive Steam.

Steffy denied the assertion and does seem genuinely interested in John Finnegan (Tanner Novlan) being identied as the dad. But Brooke will follow up on Hope’s verbal accusations by confronting Steffy as well. And, of course, that means that Bridge issues could flair again.