The Bold And The Beautiful (B&B) Spoilers: All Paris Wants Is Honesty, Not Status Or Money, Diamond White Explains 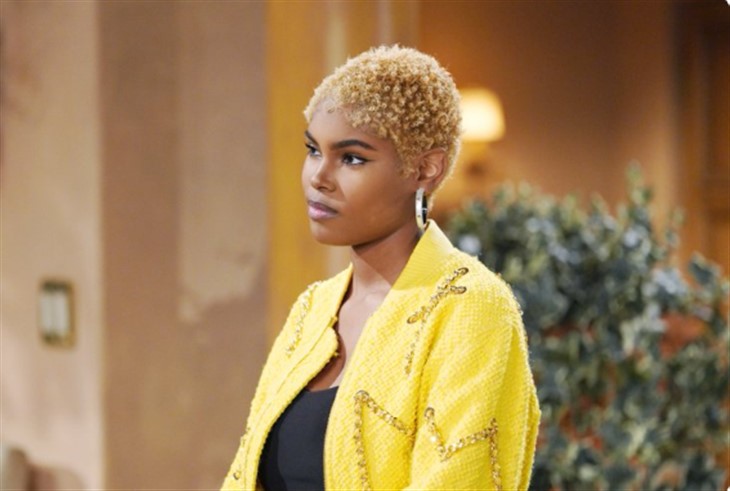 The Bold and the Beautiful (B&B) spoilers reveal that in Los Angeles Zende Forrester (Delon de Metz) is going all out for Paris Buckingham (Diamond White). He finds something so different about the Forrester Foundation newcomer. The actress explained that Paris doesn’t want money, doesn’t care about status or the Forrester name. The only expectation and the only thing she wants is honesty.

The Bold And The Beautiful Spoilers – Zoe Buckingham’s Greed

B&B spoilers reveal that Zoe Buckingham (Kiara Barnes) is selfish, greedy, disloyal, and is all about her. While Carter Walton (Lawrence Saint-Victor) is ready to dump her, she had to make a snide comment about Zende and Paris. If Zoe isn’t happy, then obviously nobody else is allowed to be happy either. Not to mention that the only person to blame for her predicament is herself. She’s not even interested in Carter taking her back just as a girlfriend so she can prove she loves him. She didn’t say “let’s take things slow and I’ll prove it to you.” She just doesn’t want the engagement ending. This is because all she cares about is the money and status attached to Carter.

However, Paris is totally different despite sharing DNA with Zoe. The whole reason why she went into social work was to help people, even though it pays next to nothing. White confirmed this while chatting to Soap Opera Digest about the storyline. She has a sincere desire to just help people and it’s something she gets great fulfillment in doing.

The Bold And The Beautiful Spoilers – Zende Forrester Going All Out

The Bold and the Beautiful spoilers reveal that Zende is going all out to prove himself to Paris. She was hurt and angry that while showing interest in her, he was also flirting with Zoe. What Ridge Forrester (Thorsten Kaye) discovered didn’t sit well with Paris. However, Zende is begging for another chance and will do everything to prove himself. It seems to be working because she’s quickly falling for Zende, despite being hesitant to trust him.

White explained to the magazine that with Zoe and all the other women Zende has known, they all have certain expectations. They all want the money, the status attached to the Forrester name, etc. For Paris, she doesn’t care about any of these things. She would still feel the same about Zende even if he was worth nothing. The only thing she wants is honesty.

The Bold And The Beautiful Spoilers: Liam And Finn’s Feud Stresses Out A Pregnant Steffy #bb #boldandbeautifulhttps://t.co/VWPaOcf39Z

“Paris just sees the good in people and doesn’t ask for much in return, and I think that’s why all these things are happening to her. She realizes Zende is used to people who come into his life and expect certain things because of his status, and Paris is the one person who isn’t asking for anything but honesty. I think he’s surprised by that.”

However, Zoe isn’t going to be happy when she learns about Zende’s “getaway” for Paris. The worse things get with Carter, the more she will resent Paris’ romance. Expect Zoe to hit the roof when she finds out how good Paris is being treated. After all, Zoe feels entitled to everything so of course, she would be resentful and jealous.