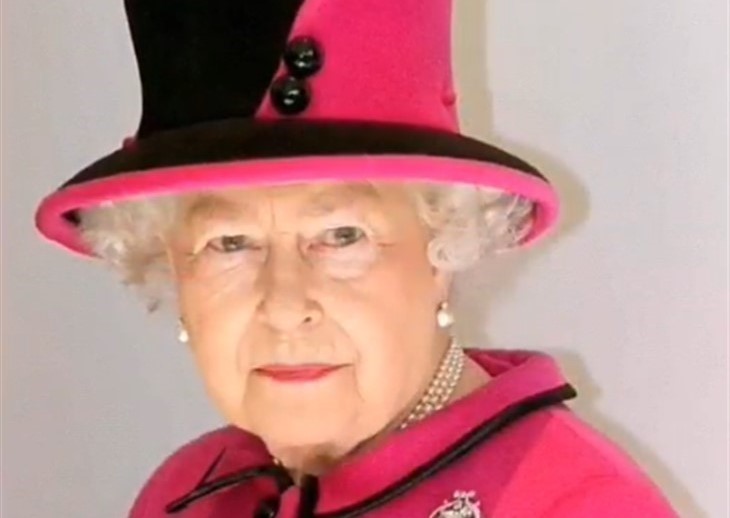 British Royal family news reveals the Queen is very much a family person and draws strength from being around family, especially after the death of her husband of 73 years. During the long-awaited meeting at Buckingham Palace, visitors spotted pictures of the members of the Royal Family, including a rare photo of Prince Harry and Meghan Markle. The picture was taken to celebrate Harry and Meghan’s engagement, although it was never officially released to the public.

Queen Elizabeth, 95, had her audience with Prime Minister Boris Johnson on Wednesday, making it their first time meeting face-to-face since the Coronavirus pandemic began. The meeting took place at Buckingham Palace in London, where the monarch returned after spending most of the past year carrying out her royal duties from Windsor Castle.

As always, the Queen displayed a collection of family pictures — including a rare shot of Prince Harry and Meghan Markle framed next to a bouquet of flowers. The picture was taken in celebration of the couple’s engagement, and while not released to the public, it was seen only in the background of other photos by eagle-eyed fans.

Other images include Prince William and Kate Middleton’s engagement portrait and a photo of the Queen and her husband, Prince Philip, who died early April at the age of 99. The picture was taken at the Queen’s 90th birthday.

Prince Harry and Meghan Markle welcomed their second child and first daughter earlier this month and named her after the Queen’s special family nickname, Lilibet. Although the name usage sparked some controversies at the time, a friend of theirs defended them, saying that the couple spoke to Her Majesty about using the name.

“The Duke spoke with his family in advance of the announcement, in fact, his grandmother was the first family member he called. During that conversation, he shared their hope of naming their daughter Lilibet in her honor,” the representative said. “Had she not been supportive, they would not have used the name.”

Royal Historian Robert Lacey has remarked on the bond that Harry shares with his grandmother, calling the Queen a “stepmother” figure to both Harry and his brother, especially after the painful death of their mother.

“She was a sort of stepmother for both Harry and William,” he told PEOPLE at the time. “We have all focused on her coaching of William as the future King, but we are realizing now the importance of the emotional bonds that she’s been able to establish with Harry, and their ability to talk to each other directly. That affection remains.”

Even after stepping down from their roles as senior royals and relocating to Montecito California last year, Harry has said that he still keeps in touch with his grandparents over video calls during his appearance on the Late Late Show in February. He also added that they’ve seen little Archie running around.

“Whatever decisions are made on that side, I will never walk away,” Harry said in reference to the royal family. “I’ll always be contributing. My life is public service, so wherever I am in the world, it’s going to be the same thing.”

Be sure to catch up on everything happening with the royal family. Come back here often for royal family news and updates

Days Of Our Lives (DOOL) Spoilers: Will Nicole Get The Goods On Sami – Kristen Lets Loose