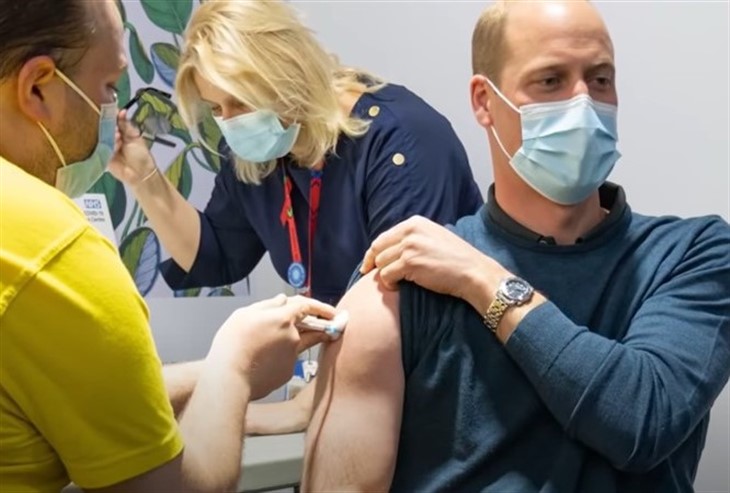 British royal family news shows that Prince William, Duke of Cambridge has received his first dose of the coronavirus vaccine. He got his shot today from NHS medical staff at the Science Museum vaccination center in London.

A source previously told The Sun, “William was hit pretty hard by the virus – it really knocked him for six. At one stage he was struggling to breathe, so obviously, everyone around him was pretty panicked.”

“After seeing medics and testing positive – which was obviously quite a shock given how fit and healthy he is – William was determined it should be business as usual though. He was determined to fulfill his engagements.”
The palace has never confirmed nor denied reports that William contracted the virus last spring.

In February William encouraged people to get the shot so that, “younger generations,” will feel, “it’s really important for them to have it.”

He tweeted this morning, “On Tuesday I received my first dose of the Covid-19 vaccine. To all those working on the vaccine rollout – thank you for everything you’ve done and continue to do.”

He posted a picture of himself as he received the shot. His sleeve is rolled up and social media had fun remarking about the dad of three’s very toned arm!

Royal Family News – William Does Not Have A Dad Bod

Kensington Palace did not indicate which vaccine William received. Because he is under 40 he is eligible to receive the Pfizer/BioNTech or Oxford-AstraZeneca shot.

William is left-handed and he chose to have the shot in his right arm. The Queen and Prince Charles also made public their decision to have the vaccine.

His wife Kate is said to get the shot soon.

The news that Prince William was ill with coronavirus in April 2020 was spilled by a visitor to a royal event. He claimed William told him he, “struggled to breathe,” during his battle with the virus. It was reported that William did not announce his illness because he did not want to alarm the public. At the time of his reported illness, both his father and Prime Minister Boris Johnson were stricken with the virus.

He was said to have self-isolated at Norfolk, at the same time conducting 14 telephone and video call engagements in April.