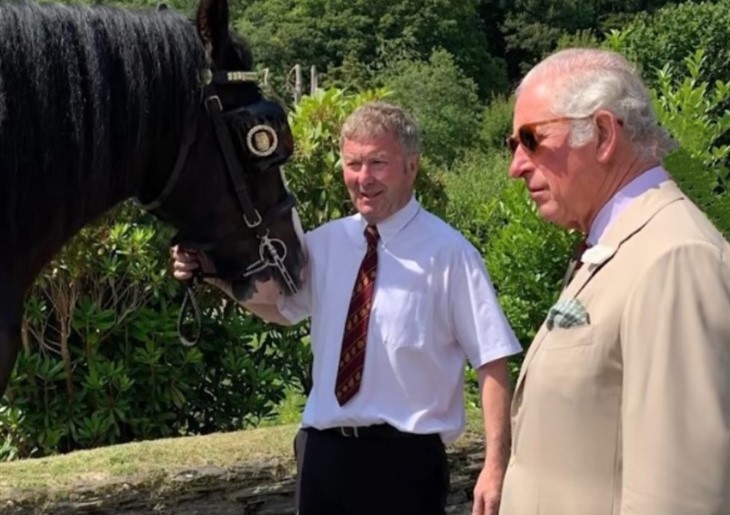 British royal family news shows that Prince Charles is having a grand summer, despite the shade being thrown at him by bratty son Prince Harry. This week he had the pleasure of meeting Prince George, and no it’s wasn’t his young grandson who like him will one day rule the UK.

This Prince George Has Four Legs And Wears A Saddle!

On Thursday Charles Prince of Wales was in the little burg of Nevern in West Wales where he was introduced to a 5-year-old horse that just so happens to share the name of his 7-year-old grandson.

Charles told the horse’s owner, John Fletcher of Gentle Giants of Moylgrove, “It’s so wonderful of you. Thank you so much for bringing him.”

Fletcher told Charles a bit about the horse and it seems that horsey Prince George has a job pulling carriages for weddings and funerals, plus he also is used to plow fields. The horse is still growing, and at one-ton weight tops the scales.

The prince seemed in his element, asking Fletcher is his farm had stallions. When he was told that the mares are sent to stud in North Wales, Charles laughed, “That must be very exciting.”

Charles was in Wales to learn more about the restoration of the bells at the local St. Brynach’s Church. The bells were rung for the first time in 120 years with Charles himself testing the three refurbished Ellacombe bells.

One of the bells was named after author Agatha Christie as her grandson Matthew Prichard helped to raise the £510,000 needed for their complete restoration.

Prior to his visit, Charles Prince of Wales began his day by attending a service held at St. David’s Cathedral. After that he toured several other churches located around the Pembrokeshire area in celebration of the hundredth anniversary of The Church in Wales.

His adventure was a bright spot in what has been a trying time as regards his runaway royal son Harry now the Fresh Prince of Montecito. Harry has methodically directed public anger and scorn toward his father by calling him out as an unfit parent and suggesting he left him penniless. The latter claim was trashed by documents showing that 30-something Harry continued to live on his dad’s dime long after the time most self-respecting individuals make their own way in the world.