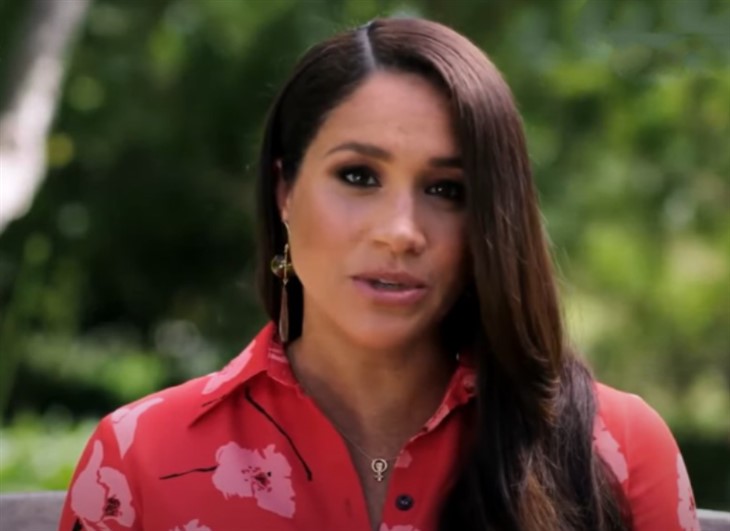 In a separate recording from her husband Prince Harry who spoke on making access to COVID-19 vaccines fair for everyone in his opening speech, she talked about the impact of the Coronavirus on women of color, especially for those women who have lost their means of livelihoods since the beginning of the pandemic: “Generation of economic gain wiped out.”

For her speech, the Duchess of Sussex wore a powerful piece of jewelry said to be inspired by her daughter who the couple is expecting to arrive this summer. The Awe Inspired “Women Power Charm Necklace” is golden and features a pendant with the symbol for females alongside a raised fist.

In her moving speech, she also alluded to her baby girl that is on the way.

Prince Harry and Meghan Markle served as co-chairs for Global Citizen’s Vax Live concert. The Duke and Duchess of Sussex have also partnered with Global Citizen to improve vaccine reach to many countries all over the world.

“Women, and especially women of color, have seen a generation of economic gain wiped out,” Meghan Markle said at the beginning of her speech, sitting down on a wooden bench with trees and lots of green leaves serving as her background. “Since the pandemic began, nearly five and a half million women have lost work in the US and forty-seven million more women around the world are expected to slip into extreme poverty.”

She then turned to the hopeful side of things, encouraging everyone to work together “to bring vaccines to every country and continent, insist that vaccines are equitably distributed and fairly priced, and ensure that governments around the world are donating their additional vaccines to countries in need, then we can begin to fully rebuild.”

The Duchess went further to enlighten viewers that we shouldn’t only hope to restore ourselves to where we were before, “but to go further, and rapidly advance the conditions, opportunity, and mobility, for women everywhere.”

She ended her speech on a personal note by telling the audience about the excitement she and her husband feel to be welcoming a daughter soon, “it’s a feeling of joy we share with millions of other families around the world. When we think of her, we think of all the young women and girls around the globe, who must be given the ability and support to move us forward.”

“Their future leadership depends on the decisions we make,” the Duchess continued, “and the actions we take now, to set them up, and to set all of us up, for a successful, equitable, and compassionate tomorrow.”

On Archie’s second birthday, the proud parents honored his birthday by calling for donations from around the world to support vaccine distribution, because according to Prince Harry’s speech for the VAX Live concert, “None of us should be comfortable thinking that we could be fine when so many others are suffering.”

The Bold And The Beautiful (B&B) Spoilers Tuesday, May 11: Zoe Gets The Shock Of Her Life