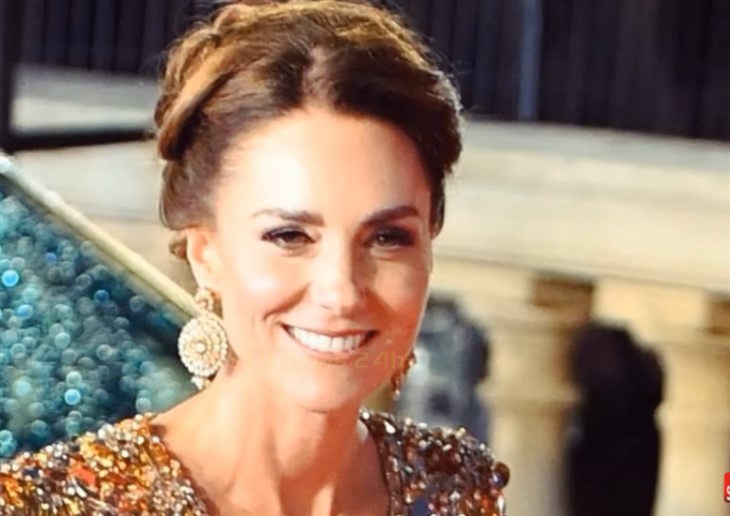 British royal family news shows that Kate Middleton the Duchess of Sussex stole the spotlight at Tuesday night’s world premiere of the latest James Bond movie, “No Time to Die.” Kate was resplendent in a golden sheath accentuated by glittering accents and the dress showed off her hourglass figure perfectly.

It is not the first she has appeared at a Bond film premiere. Back in 2015 she and Prince William attended that film’s debut and she was seen in an elegant and understated blue gown. She was gorgeous then and she appeared even more beautiful in 2021.

In 2015, Middleton wore a wispy light blue chiffon dress with a just few jeweled accents and Prince William appeared in a tux.

This week Prince William and Kate, the Duke and Duchess of Cambridge were joined by William’s father, Prince Charles, and his wife, Camilla, the Duchess of Cornwall. The two couples looked like the regal family they are, eat your heart out Harry and Meghan. In the case of the latter couple they have shown, most recently in NYC last weekend that money can buy access but it can’t buy credibility.

The movie stars on hand were lovely but none held a candle to Kate and her golden frock. If possible, her eyes glittered more brightly than any sequin sewn on the gown—she absolutely lit up the red carpet with her appearance.

Royal Family News – Kate Is Coming Into Her Own

Upon closer inspection it was revealed that Middleton wore a gold-embellished gown with a cape. Her hair was exquisitely pulled up into an elegant bun and she completed the look with a pair of amazing gold earrings. The designer of the gown has not been revealed.

Kate typically opts for traditional, classic designs, but her red carpet appearance for the debut was ab fab.

The two couples took a turn together on the red carpet at London’s Royal Albert Hall, then watched a special screening of the movie. This is the 25th film in the James Bond franchise and the final one with Daniel Craig as Bond.

The audience was rounded out with health care workers and members of the Armed Forces, who were included in the festivities in appreciation for their service during the pandemic.