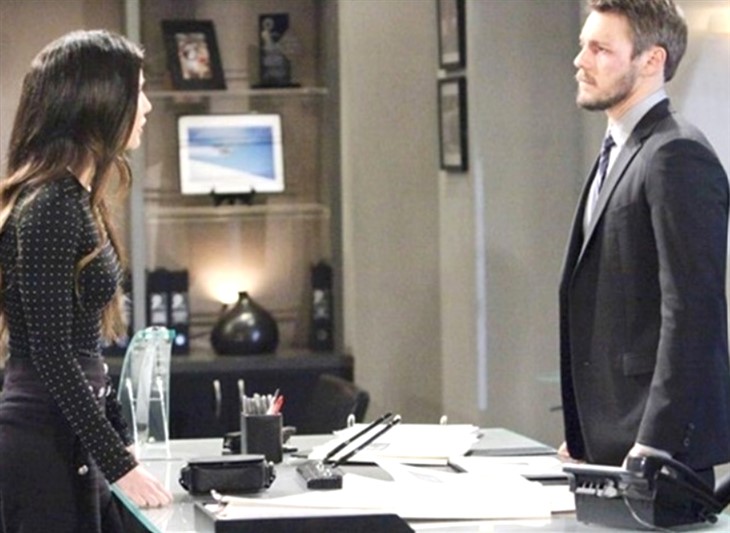 The Bold and the Beautiful (B&B) spoilers for Friday, October 1, 2021, reveal in Los Angeles Steffy Forrester spending time with Liam Spencer in an episode with a large sense of deja vu.

On Thursday, Eric Forrester (John McCook) took some time out of his life to confess a few fascinating and private things to Katie Logan (Heather Tom) and on Friday, his granddaughter, Steffy (Jacqueline MacInnes Wood), needs someone to confide in as well, so she chooses Liam (Scott Clifton).

The pair spend some time together as a family with Kelly while Finn (Tanner Novlan) finds his own confidante, Hope Logan Spencer (Annika Noelle), Liam’s wife. How weird is this entire scenario? When did Hope grow so close to Finn that she’d be the person he would turn to when he’s distressed? It doesn’t even look like she’s going to have much sympathy for him because he’s torn between Sheila Carter (Kimberlin Brown) and Steffy, for pity’s sake. One is nuts and one is the mother of his child and not so nuts, so this should be a no-brainer.

Will Hope also be concerned that Liam is spending quality time with Steffy once again? Is The Bold and the Beautiful ever going to let the Hope/Liam/Steffy triangle go or will this just be part of the show for years to come like Brooke (Katherine Kelly Lang), Ridge (Thorsten Kaye), and Taylor (Hunter Tylo)?

Sheila could barely even believe it when Finn chose Steffy over her again. Somehow, she truly believed if she just kept sneaking into his living room and harassing both him and his wife she was going to win Finn over. She still plans to get rid of Steffy because she believes she is the only one getting in the way of what she wants.

As Sheila stews and fumes trying to come up with a new scheme, she makes a new acquaintance and this person gives her some unsolicited advice. It might also be dangerous advice. Will Sheila take it? If that danger comes to Steffy, she probably will. Stay tuned to The Bold and the Beautiful weekdays to see how these stories play out.

GH Spoilers: Is Maurice Tired Of Being Sonny Corinthos?