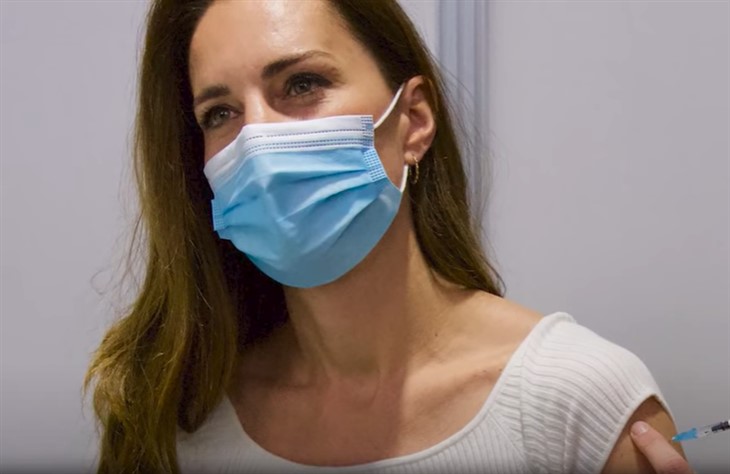 British royal family news shows that Kate Middleton, Duke of Cambridge has been given her first dose of the Covid vaccine, following the public acknowledgment that her husband Prince William received his earlier in the month.

She received the vaccination at London’s Science Museum and while there she thanked, “everyone who is playing a part in the rollout.”

In sharp contrast to her thoroughly polished uniforms when performing public duties, Kate appeared every inch the suburban mom out for a Saturday lark.

The Duchess of Cambridge had on a blue face mask and wore a short sleeve shirt with light blue jeans. Her long brown hair was glossy and curled as usual and her makeup was impeccable.

In a post on the official Kensington Palace Twitter account, the mother of three said that she was very grateful for the workers dispensing the vaccine.

Her shot came ten days after William had his first shot from NHS medical staff at the same location.

William posted a photo of himself wearing a mask with his sleeve rolled up and a needle in his arm to show he had been vaccinated.

London’s Science Museum has both the Pfizer/BioNTech and Oxford-AstraZeneca jab and Kate and William are entitled to either as they are both under 40. Kensington Palace has not revealed which vaccine was given to the royal couple as was the case when Queen Elizabeth received her first shot.

The post in which Kate was seen receiving the shot showed a staff member who has not been identified. She wrote, “Yesterday I received my first dose of the Covid-19 vaccine at London’s Science Museum. I’m hugely grateful to everyone who is playing a part in the rollout – thank you for everything you are doing.”

Health Secretary Matt Hancock replied to the Kensington Palace tweet. He also received the shot at the Science Museum and said: “In the past fortnight more than half of all people in their 30s have been vaccinated. Delighted HRH The Duchess of Cambridge was able to get her jab at the Science Museum.”

It was earlier reported that Prince William was vaccinated on May 18. Both Kate and William received the shot after his father Prince Charles and grandmother Queen Elizabeth received their shots. Normally the royal family does not share medical information but made an exception in this case.