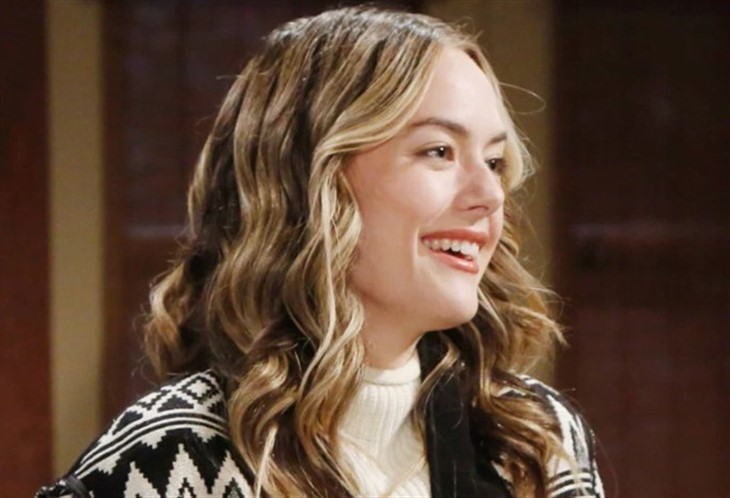 According to B&B soap opera spoilers, Hope will receive some good news from an unexpected source, and that could be Thomas Forrester’s (Matthew Atkinson) friend Vinny Walker (Joe LoCicero). Viewers of The Bold and The Beautiful will remember that Vinny was cornered in the hospital lab by Thomas and Dr. John “Finn” Finnegan (Tanner Novlan) and forced to confess he had altered the results of Steffy Forrester’s (Jacqueline Macinnes Wood) paternity test. Of these three, Vinny would be the least likely person to confess this to Hope, although there is a distinct possibility that he may be forced to do that as well, since in Thomas’ opinion he should apologize to her.

He should apologize to Steffy as well, but Finn may have relayed that when he gave her the good news that he is the father of her baby, not Liam! The fact that Liam had been shown on the altered test as the father of Steffy’s baby has been a major fact causing division between Liam and Hope, and has made it impossible to try and come to a point of reconciliation between the two.

That would be understandable, considering Liam was so bold as to insist on being in the delivery room with Steffy, and even though he needs to prove to Hope that he has truly moved on from her, the knowledge that the new baby is not Liam’s may be a starting point for Hope!

Bold and the Beautiful updates and spoilers say Hope and Liam have been for the most part separated since she has not been able to handle the betrayal she felt when he slept with Steffy. It was a double betrayal because Steffy and she had finally come to a point of not being rivals after many years, and now this!

The pregnancy and the supposed paternity of her child did not help matters any and even if there is too much for Hope to forgive, Liam still needs to know the truth. Any hope for moving past this very serious rough patch may be predicated on Liam’s response to Hope’s news, which he may not want to believe at first, especially considering that she may tell him this news came from Vinny!

The Bold And The Beautiful Spoilers: Hope Logan Pursues Thomas?https://t.co/noHIh0tF0l

Even if she doesn’t tell him Vinny told her he will likely be suspicious that Thomas, Finn, or both made it up to keep him away from his child! Liam’s suspicious nature, many times leading him to unfounded conclusions is the most deeply rooted problem between himself and Hope.

A good example is when he so easily believed that Hope was cheating on him the night he saw Thomas making out with the mannequin, and his accusations were only the start of the distrust between them. This news on The Bold and the Beautiful, although very good news, may not be enough to save Hope and Liam’s marriage, but Hope will tell him because he has the right to know whether he believes it or not!

Royal Family News: Will Prince Harry Show Up At Unveiling Of Princess Diana Statue In July?