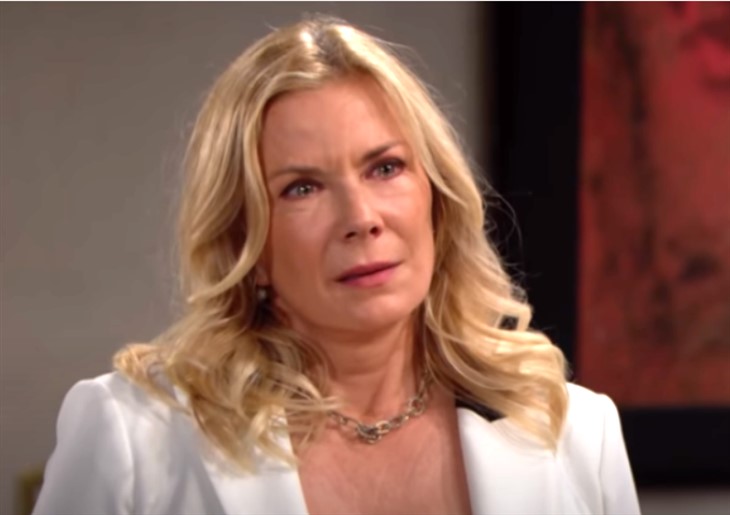 The Bold and the Beautiful (B&B) spoilers document that Brooke Logan Forrester (Katherine Kelly Lang) learns about Steffy Forrester’s (Jacqueline MacInnes Wood) pregnancy and naturally erupts. It is understandable that Brooke’s maternal instinct would be to protect her daughter, Hope Spencer (Annika Noelle), who is directly impacted by this storyline.

However, Ridge Forrester (Thorsten Kaye) has a daughter in this story as well. His paternal instincts will also be in play as he becomes aware of all that is happening between a quartet of connected characters.

Bridge is B&B’s most iconic couple, when looking back across this soap opera’s entire history. Fans of this pairing were glad to see healing in recent months while also wondering how long peace and tranquility would last.

Current The Bold and the Beautiful developments stand to create yet another rift between Brooke and Ridge. That doesn’t necessarily mean that they will separate, or divorce, as they have so often in the past. So, here’s hoping that the writing staff has Bridge recognize why each person needs to protect their child, while also following through with an agreement that was made to not allow any family drama to disrupt what was restored.

Liam Spencer (Scott Clifton) initiated the night at the cliff house. Steffy was not seeking him out and was stunned when he arrived in a huff and told a story that he assumed represented Hope’s betrayal.

Both halves of the former Steam chose to start drinking, which enabled deep emotional nostalgia. That led to a Steam reconnect and the situation that they, Hope, John Finnegan (Tanner Novlan) and increasing number of other people are now involved in.

Steffy has taken her share of responsibility for what happened. But Liam is half responsible. Like Steffy, he is also apologetic and is awaiting paternity test results.

Ridge allowed himself to engage in what became a complicated friendship in the recent past. Ridge did that because he was playing off his latest dissatisfaction with Brooke.

The Bold And The Beautiful (B&B) Spoilers: February Sweeps – Ridge And Brooke Crumble, The Demise Of Bridgehttps://t.co/a0PWHlPEjs

In this scenario Brooke and Ridge will serve as their daughter’s protectors. The nature of the situation and the stances that each half of Bridge will take are important.

So, it will be interesting to watch how Ridge, specifically, responds while Brooke is verbally assailing Steffy. Fans know what happened when Lang’s character repeatedly chided Thomas Forrester (Matthew Atkinson) and the upheaval that led to.

SOS is a leading source for everything linked to The Bold and the Beautiful. Check back regularly for new B&B spoilers, comings and goings updates, and soap news!

Days Of Our Lives (DOOL) Spoilers: Jack Tries Paying Gwen To Disappear, Gets Slapped And Snapped At