Days Of Our Lives (DOOL) Spoilers: Jack Tries Paying Gwen To Disappear, Gets Slapped And Snapped At 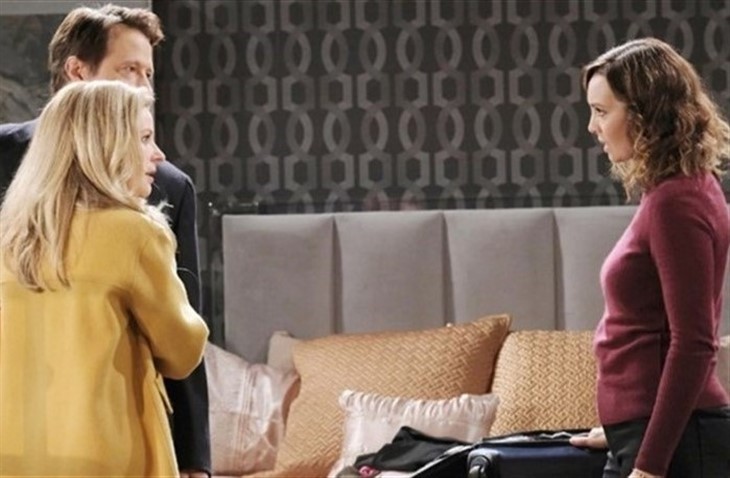 Days of Our Lives (DOOL) spoilers reveal that in Salem the DNA test shows Jack Deveraux (Matthew Ashford) is Gwen Rizczech’s (Emily O’Brien) father. Due to all the damage she has done to the Deveraux family, Jack tries paying her to leave Salem. Gwen responds by slapping him hard across the face, then storms off. How can Jack fix this problem and protect his family?

DOOL spoilers reveal that Jack and Gwen get a DNA test. The results come in and just like Gwen kept saying, they are father and daughter. Jack doesn’t panic, freak out, or get upset. He just accepts it for what it is and him having a third child is just part of his life now. Even though the positive DNA results should make Gwen pleased, she just starts berating him for not wanting anything to do with her. For choosing Abigail DiMera (Marci Miller) over her. Jack tries to tell her that’s not true and he didn’t know about her until recently, when she said that they were father and daughter. However, she doesn’t believe Jack and the situation just seems to be escalating.

According to the new issue of Soap Opera Digest, Jack thinks about all of the destruction and damage Gwen has done to his family. He can’t allow his loved ones to continue going through this. So, he offers to pay Gwen any amount of money she wants to just go away. However, she doesn’t give him a dollar amount. She just stands and stares at him in shock for a few minutes.

Days Of Our Lives Spoilers – Jack Deveraux Gets Slapped

Days of Our Lives spoilers reveal that once Gwen shakes off the shock, she slaps Jack hard across the face.Jack can’t get over how angry this young woman is. He doesn’t understand why he was slapped, but it’s because that’s exactly what happened with her mother, Tiffany Rizczecch. She was paid to take her baby and disappear. Of course, Gwen thinks that Jack is the one who got rid of Tiffany and the baby. However, we will find out this week that it was actually Laura Horton (Jamie Lyn Bauer). Jack is being truthful when he says nobody ever told him he had a child.

If Gwen doesn’t want money and being offered to go away is insulting to her, then what does she want? Deep inside, she wants her father to apologize for not being there and try to be here now. But Gwen would never admit this out loud. So, her abandonment issues and fear of rejection masquerade as anger. Instead of putting the blame on Jack, she is directing all of her rage at someone who’s innocent in the situation, Abigail.

Even though this situation will be tense and complicated for a while, it seems that Gwen will need her father sooner rather than later. Next week, she goes into a panic and has nobody to turn to but Jack. She calls him up and desperately pleads for his help. What kind of trouble does she find herself in and will Jack agree to help?

The Young And The Restless (Y&R) Spoilers: Sharon Takes Drastic Action To Save Faith