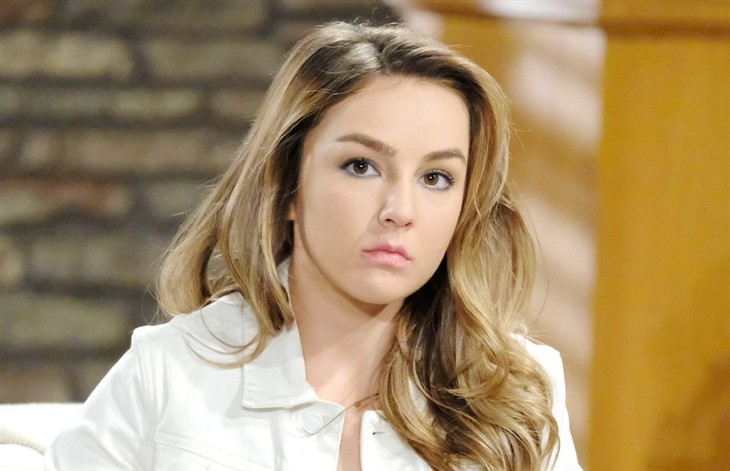 General Hospital (GH) spoilers and updates reveal the last time we saw Kristina Corinthos-Davis (Lexi Ainsworth) was on the night before Alexis Jerome (Nancy Lee Grahn) was sent to Pentonville. We know that she is staying at Alexis’ house with Sam (Kelly Monaco) and Molly (Haley Pullos) while Alexis is away, but who knows what she is up to while she is there? Here are some ways Kristina Corinthos could get General Hospital airtime now:

Suppose Kristina Corinthos and her sisters decide to take a road trip before summer ends. After a series of debates, they eventually agree on going to Nixon Falls, Philadelphia. What if after a long drive, they decide to stop at the Tan-O for some grub, and they happen to see Sonny (Maurice Bernard) running the bar? Kristina may initially think she is seeing his ghost, but soon she will learn that he is alive.

When she does find out, she will be overjoyed but she will also be confused. She will definitely try to talk to her father and ask him how he managed to survive the fall from the bridge back in December. However, she may not have much luck since Sonny aka Mike/Smike does not have much memory of his past life. On the other hand, it is revealed that Sonny is starting to remember some things about his life before the accident, according to General Hospital Tea. Therefore, he will eventually remember Kristina as his daughter.

After he does, Kristina will want to take him into the car and bring them back to Port Charles. If only it were that easy. Nina (Cynthia Watros) will stop at NOTHING to cover up her dirty not-so-little secret on General Hospital. Nevertheless, what if Nina was going out or taking a nap? This would give Kristina and her sisters an opportunity to bring Sonny home and share the great news with their family and friends. Then he and Carly (Laura Wright) could reunite, and Jason could go back to pursuing a relationship with Britt (Kelly Thiebaud).

GH Spoilers – There’s A Possibility That Morgan Corinthos Is Alive

According to Celeb Dirt Laundry spoilers, Josslyn (Eden McCoy) hinted that Morgan (ex- Bryan Craig) might still be alive. Other sources say that he is in Nixon Falls. Kristina will want to reconnect with her brother and make amends for how they left things before he died. She would also want to know why he stayed away for almost five years.

Plus, if he’s in Nixon Falls, it would make for a beautiful father-son reunion between Sonny and Morgan (as soon as Sonny remembers him, that is). Like the situation with Sonny on General Hospital, Kristina Corinthos would want to bring Morgan back home. Carly, Josslyn, Michael (Chad Duell), and everyone else will be ecstatic to see both Sonny and Morgan alive.

As you may recall, Kristina, Molly, and Sam had a petty squabble last May. Sam blamed Kristina for her inability to see Jason because of her parole officer, Dolores (ex- Andi Chapman- Google). As we know, Sam shot Shiloh (ex- Coby Ryan McLaughlin) in the back to prevent him from hurting Jason (Steve Burton). She stated that if Kristina hadn’t gotten involved with Dawn of Day in the first place, she wouldn’t have had to do what she did. Kristina then criticized Sam and her relationship with Jason, declaring that Sam likes to break the rules and sneak around.

She also reminded Sam that Carly and Sonny will always come first (YouTube). Molly defended Sam, saying that Sam and Jason’s relationship is real, and that Kristina is probably jealous that she didn’t have much luck with relationships. To sum it up, the sisters said some mean things to each other. Although they seem to have reconciled off-camera, who knows? It would not hurt for them to apologize to each other on-screen and discuss ways to make it up to each other. Molly could be Kristina’s wing-woman, Kristina could promise to never criticize or make fun of Sam again, and Sam could help Kristina find some direction in her life.

Other Excuses for Kristina to Have General Hospital Airtime

After Julian’s (ex- William DeVry) death on General Hospital, Ava (Maura West) found out that Julian left Charlie’s Pub to her, according to General Hospital Wiki. Since Kristina has experience bartending there, Ava might consider bringing Kristina on as a co-owner. Now that the gallery is temporarily closed thanks to her and Nikolas’ (Marcus Coloma- Google) stalker “leaving ‘gifts’ “ in there (General Hospital Tea), Ava could possibly be spending more time at Charlie’s Pub. She will need Kristina’s help.

Kristina will also give Michael tough love and motivate him and Willow (Katelyn MacMullen) to come clean to Chase (Josh Swickard) about their love for one another. She will not bear to see her big brother suffering.

Lastly, the Nurses’ Ball is coming up in the fall, and General Hospital’s Kristina Corinthos would be a great performer. She gave a stellar performance of Sara Bareilles’ “Brave” along with Emma, Amy, and Valerie (according to YouTube) in a past Nurses’ Ball. A lot of GH fans probably want to see her perform again, whether it’s in a group or solo.

Do you think Kristina should get more airtime? If so, comment your thoughts and ideas below!