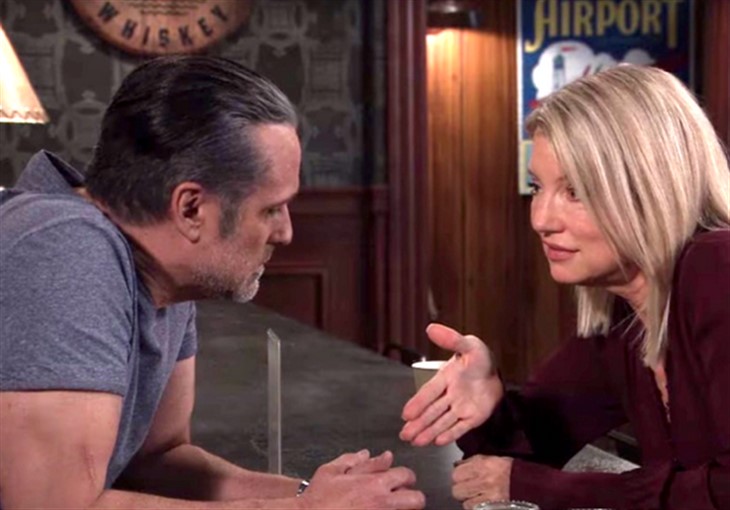 General Hospital (GH) spoilers for Wednesday, October 13, 2021, reveal Sonny facing off with Nina, but unable to be the mean, mean, man he once was.

General Hospital Spoilers – The Softer Side Of Sonny Corinthos Appears

Phyllis (Joyce Guy) reminded Sonny Corinthos (Maurice Benard) to remember his inner-Mike when he popped by Crimson to see Nina Reeves (Cynthia Watros). Kindness, that’s what Mike was all about and Phyllis knows that Sonny has that in him deep down inside.

Sonny tries his best to be big, tough Sonny when he confronts Nina in her office, but it’s not as easy as he thought it would be when he headed down there. He tells Nina there have to be ground rules between them, but still can’t bring himself to hate her. Nina just wants no animosity between them so she agrees to his rules. Too bad she still has to deal with Carly Corinthos (Laura Wright).

And Carly certainly is Nina’s worst nightmare right now. She tells Josslyn (Eden McCoy) that she has no idea how badly she wants to hurt Nina and she looks like she does so when Nina incredulously asks Carly if she’s telling her to get out of town. We don’t think Nina is going to listen to her.

Austin (Roger Howarth) is still determined to get what he feels is rightfully his — ELQ shares. The problem is he still seems like an interloper to every Quartermaine and nobody wants to really help him yet. On Wednesday, he corners Jason Morgan (Steve Burton) at the boxing gym looking for assistance, but Jason tells Austin that he’s not going to get anything from him. However, it doesn’t look like Austin is going to let Jason deter him.

Meanwhile, Brook Lynn (Amanda Setton) takes her quest to get rid of Austin to a whole new level when she tries to get him fired for violating HIPAA laws and talking to her about suspecting Leo has autism. Too bad Chase (Josh Swickard) couldn’t convince Brook to just trust the guy because that would be better for the Quartermaines in the long run and especially better for Leo. Stay tuned to General Hospital weekdays to see how these stories play out.