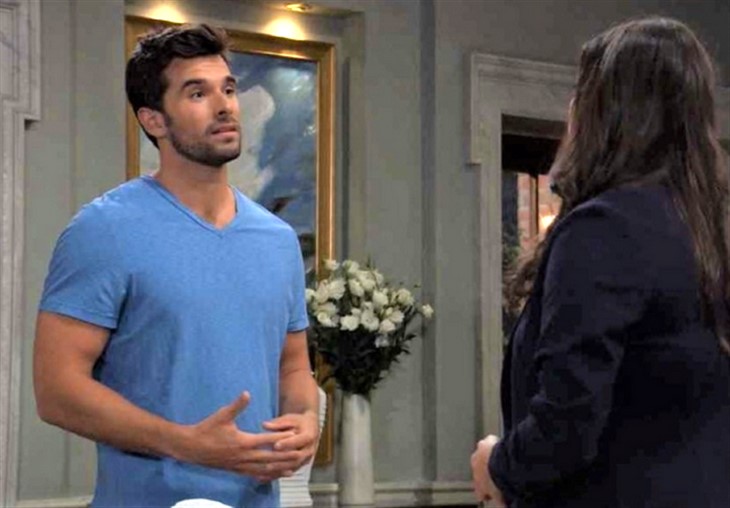 General Hospital spoilers for Wednesday, November 24, 2021, reveal Brook Lynn and the Quartermaines having to get used to a new normal, but she has to shock her family with some big news first.

General Hospital Spoilers – Out With Valentin Cassadine, In With Chase Harrison

Brook Lynn (Amanda Setton) first surprised the Qs when she arrived back in Port Charles pregnant with what she said was Valentin Cassadine’s (James Patrick Stuart) child and managed to get him to give her back those ELQ shares, but now she has new news. Bailey, the baby she claims is hers? Well, she still claims Bailey is hers, but oops, Harrison Chase (Josh Swickard) is the father and not Valentin. How will Monica (Leslie Charleson) get by without Yuri? Will she have to enjoy Thanksgiving pizza alone?

Ned Quartermaine (Wally Kurth) can’t believe that Brook lied like that, but Brook tends to typically lie like that so he shouldn’t be overly surprised. But Brook has quite the tale to tell and her dad is there to listen. If only Maxie Jones (Kirsten Storms) would just let her reveal the actual truth about who this baby really is.

Hamilton Finn (Michael Easton) is also surprised to hear his brother is now a father. Will Chase tell Finn what is really going on so he doesn’t become attached to this baby like everyone else is?

GH Spoilers – Big News For Dante Falconeri And His Mom

Olivia Quartermaine (Lisa LoCicero) finally decides to have a talk with Austin Holt (Roger Howarth) about Leo. She apologizes for doubting him and now asks for help on getting Leo a proper autism diagnosis so he can get the treatment he needs.

Olivia’s other son, Dante Falconeri (Dominic Zamprogna), prepares for his first Thanksgiving with Sam McCall (Kelly Monaco). They are a couple now and may even take things to the next level soon. Does he bring her to the Q mansion for Thanksgiving? It’s not like her kids aren’t always there anyway since they are actual Quartermaines.

Curtis Ashford (Donnell Turner) still can’t believe that his father is alive and showed up in Port Charles wanting a relationship with him after all these years. He tells Portia Robinson (Brook Kerr) what’s been going on and she wonders if Curtis can believe this mysterious man.

The elder Mr. Ashford also pays a visit to TJ Ashford (Tajh Bellow) and wants to know exactly what he wants. Stay tuned to General Hospital weekdays to see how these stories play out.

Days Of Our Lives Spoilers: A Spooky And Scary Thanksgiving In Salem