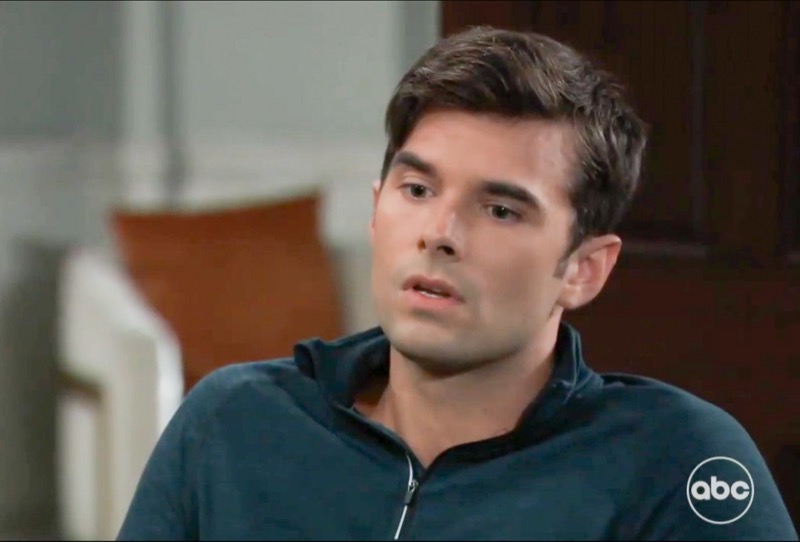 General Hospital (GH) spoilers for Wednesday, August 25, 2021, reveal in Salem Chase making a decision between being loyal to Michael — the man who slept with his wife — or being loyal to Austin, a man he just met.

General Hospital Spoilers: Will Chase Have Some Backbone?

It was lovely to watch Chase (Josh Swickard) make Willow (Katelyn MacMullen) weep as she revealed a truth that he already knew. Then, he revealed the truth that he could walk and why he lied to them. He has proof that Edward wanted Jimmy Lee to have a stake in ELQ. And Austin (Roger Howarth) wants that proof.

As Michael (Chad Duell) begs Chase not to betray him, Austin (Roger Howarth) gets to see a whole different side of Michael, but which side will that be? Chase is very angry and the paper does tell the truth and all Chase really ever wanted was the truth. Maybe Chase will just be honest with Michael and let Austin have what he feels he deserves.

Later, Willow and Chase have it out and Willow tells him she will always love him for being there for her, but yes, she is in love with Michael now.

Is there anything more sexy than Valentin Cassadine (James Patrick Stuart) carrying a baby in a front carrier? Probably not. But that’s not what Maxie (Kirsten Storms) is thinking about when she sees Valentin and Baby Bailey Louise at the Metro Court.

He tells her he has news about her baby while holding her baby and not even knowing it. Will Maxie be able to keep herself in check? After all, Peter (Wes Ramsey) is out there lurking and she has no idea how close she was to him just hours earlier on the Pennsylvania side of the river.

Speaking of Nixon Falls, for some reason Peter didn’t decide to follow Maxie back to Port Charles. Instead, he decided to hang out at the Tan-O and torture Nina (Cynthia Watros). Will she really keep his presence a secret just to keep the fact that Sonny (Maurice Benard) is alive a secret? That would be a low, low blow. Stay tuned to General Hospital weekdays to see how these stories play out.