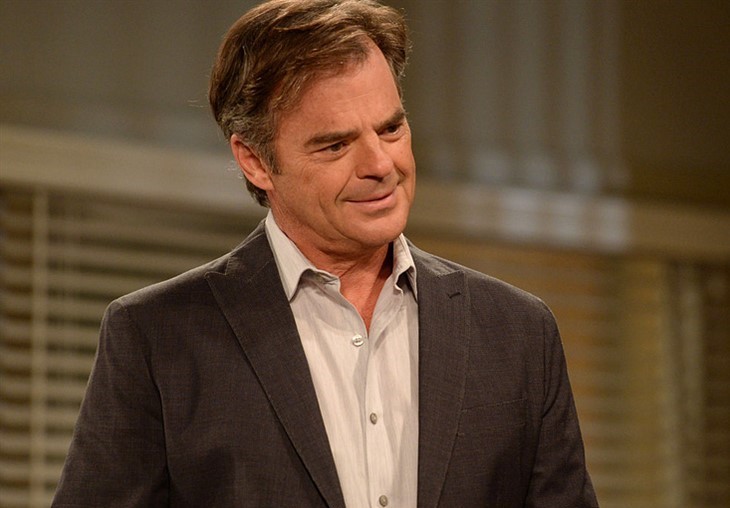 General Hospital (GH) spoilers tease that In Port Charles, NY, Ned Quartermaine (Wally Kurth) will make an offer that Austin Gatlin-Holt (Roger Howarth) will be happy to refuse in an upcoming episode of General Hospital!

General Hospital viewers will remember that Austin knows that Edward Quartermaine (John Ingle) had been in touch with Jimmy Lee Holt (Steve Bond) before his death. Ned told the Quartermaines in a family meeting that he had knowledge of his mother, Tracy Quartermaine (Jane Elliot) intercepting mail. Edward had been corresponding with Jimmy Lee, having changed his mind about him and wanting to include him in his will. Tracy couldn’t have that, and thought Edward was not in his right mind. General Hospital viewers will recall that Ned expressed fear that Austin might actually have a valid claim to ELQ stock! Ned will make Austin an offer – to buy him out! However, Austin will be happy to refuse his offer, because he knows that he is actually due much more than what Ned has offered!

General Hospital viewers can expect that Austin will decline Ned’s generous cash offer, but it is not only because he knows that he may be due more – it is because he is more interested in the Quartermaines’ acceptance than in their money! He wants to be included in the family, but at the same time he also knows that money is the Quartermaines’ language so Austin is not surprised at the cash offer. In reality, Ned just hopes he can pay Austin to go away, but that is not going to happen. Austin is very perceptive in that he can tell Ned is being duplicitous – and he doesn’t intend for Ned to get away with it. General Hospital viewers know exactly how dysfunctional and duplicitous the Quartermaines can be, and longtime viewers will recall that Tracy even withheld Edward’s heart medication, causing him to have a heart attack – over money arguments! Austin is simply speaking the Quartermaine’s language when he demands his piece of the pie when what he really wants is acceptance as a family member!

General Hospital viewers will also see that Ned will find something else out about Austin. It turns out that Leo Falconeri (Aaron Bradshaw) has a serious cut and Olivia Quartermaine (Lisa LoCicero) brings him to General Hospital as Ned is talking to him there. Austin treats him, and Ned realizes Austin is not just a regular old pediatrician; there is something different about him! Austin sets up a follow up with himself, rather than telling Ned and Olivia to follow up with their regular pediatrician! This likely will only serve to make Ned even more suspicious of Austin, even though he treated Leo’s cut with care and skill. Ned may start opening his mouth and his mother Tracy may start coming out, because he, and Olivia as well, may think that Austin is trying to find out intel about Edward’s letters from Leo! Leo probably doesn’t know a thing about them, but most young boys are inquisitive and they explore and they get into things! They don’t know that Austin has a different spy and a much better one in the Quartermaine mansion!

Y&R Spoilers: Stitch Deals With Mariah’s Disappearance – Is There A Connection To Chance?