GH Spoilers: Valentin Makes A Move On Anna, How Will She React? 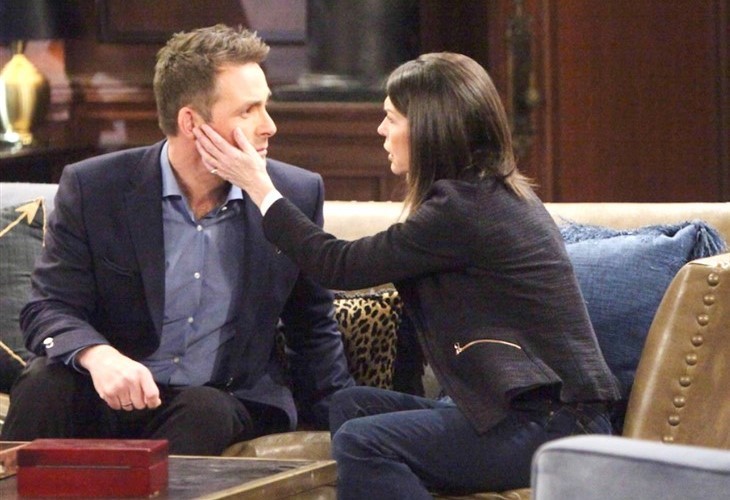 General Hospital spoilers indicate that Valentin Cassadine (James Patrick Stuart) and Anna Devane (Finola Hughes) will decide to decompress while in Greece questioning Chloe Jennings (Phoebe Kuhlman). Valentin may have a little too much to drink and make a move on Anna. Is Anna willing to see where things with Valentin could go?

General Hospital’s Anna has gotten a call about a lady that has shown up at the U.S. Consulate. Chloe has been in an accident but she is the best lead Anna has to Drew Cain’s (Cameron Mathison) location. Anna told Valentin that she could travel to Greece alone but he isn’t going to let her do that in case Peter August (Wes Ramsey) might be there. Valentin feels that he needs to protect Anna. However, Valentin is also attracted to Anna and has been for years. While Anna and Valentin await for word on Chloe Valentin may have a few drinks. Of course, alcohol offers a bit of courage to someone who needs it and he may decide to kiss Anna again. Will Anna accept Valentin’s advances or turn him down yet again?

General Hospital’s Anna is attracted to Valentin as well. However, Anna recently broke up with Hamilton Finn (Michael Easton). Valentin and Anna have flirted with each other. Valentin and Anna have kissed. Valentin had cared about Anna for years, however, he has dealt with her sister Alex Marick (Finola Hughes) as well. Valentin could not tell the difference between the two sisters and was so hurt that he took what he thought was Anna’s son and gave him to Caesar Faison (Anders Hove). Now Valentin may have a chance with Anna but is she open to trying with him?

General Hospital Spoilers – Now Is Not The Time

With General Hospital’s Peter on the loose, now is not the time to get distracted by a new relationship. As much as Anna and Valentin may want to be together, Peter has to be stopped first. Peter is after Maxie Jones’ (Kirsten Storms) daughter. Peter has also threatened to kidnap Maxie and her son as well. Valentin has no idea that his daughter Bailey Quartermaine (Harper and Scarlett Bloom) is Peter’s daughter. Valentin may need to rush home at any time to save his daughter from Peter.

Will Valentin’s lapse in judgment get him a chance with Anna? Should Valentin forget about Anna and try to find someone else? Could Anna and Valentin ever be together?