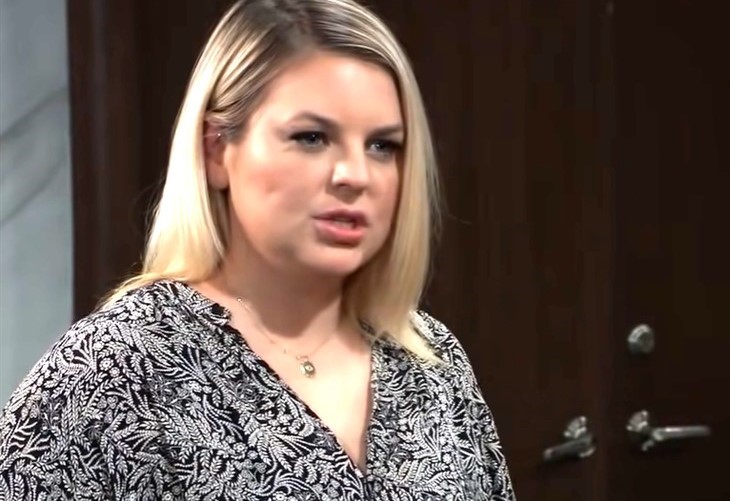 General Hospital Spoilers tease that Maxie Jones (Kirsten Storm) is currently focused on making sure Jason Morgan (Steve Burton) and Carly Corinthos (Laura Wright) have the perfect wedding and reception but very soon she will check her voice mail and get some horrifying news. Her ex, Peter August (Wes Ramsey) has currently been sighted in Nixon Falls and will surely be making his way to Port Charles.

Once Maxie listens to a voice mail left by Jasper “Jax” Jacks (Ingo Rademacher), her heart will sink. He will have the news that Maxie has been dreading. Peter is not only alive, but he has been terrorizing Nina Reeves (Cynthia Watros). He even tried to murder Nina and Phyllis Caulfield (Joyce Guy). This is Maxie’s worst nightmare brought to life and the reason that she has kept their daughter hidden. Maxie actually handed her baby over to Brook Lynn Quartermaine (Amanda Setton) to raise as her own until Peter is brought to justice. The news from Jax will cause Maxie to double down on her plans.

Right now, Brook Lynn has convinced Valentin Cassadine (James Patrick Stuart) that Maxie’s baby is really theirs. Initially, this was just a plot so that Brook Lynn could get her ELQ shares back from Valentin, but Brook Lynn came to feel for Maxie and her plight. She wants nothing more than to keep that little baby safe these days. And neither Maxie nor Brook Lynn could have picked a better protector than Valentin. So when Maxie informs Brook Lynn that Peter is coming back, she’ll beg Brook Lynn to do whatever she needs to in order to keep her baby safe.

Peter is still obsessed with Maxie. He’s likely going to come for her. Maxie knows this, and although it’s killing her inside, she realizes that she needs to stay far away from Brook Lynn and her baby right now. Peter is a very smart man, and it won’t take much for him to figure out the truth. So Maxie will have to make sure Brook Lynn is far away when Peter inevitably comes for Maxie. Peter will likely abduct Maxie and the baby needs to be far from that.

Will Maxie receive Jax’s voice mail in time to warn Brook Lynn? Will Maxie be able to keep Peter from guessing the truth? Or will Peter figure out that his daughter is under Brook Lynn and Valentin’s care? Only time will tell, so stay tune to General Hospital airing weekdays on ABC. And don’t forget to check back right here regularly for all your General Hospital news, information and spoilers!