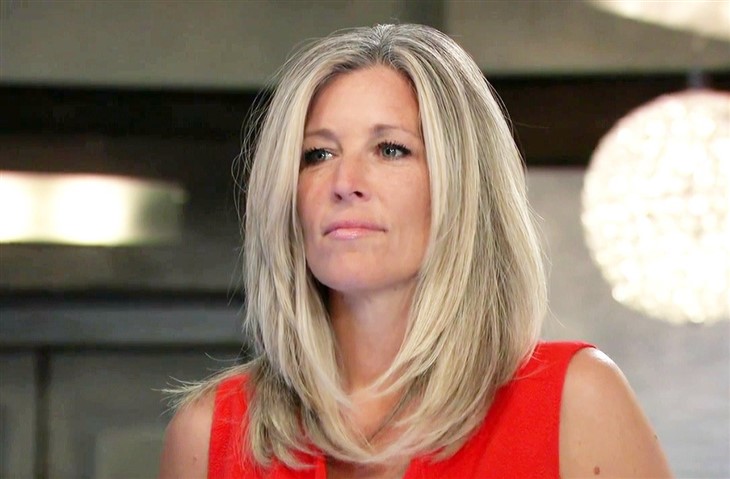 Carly (Laura Wright) is about to marry Monica’s (Leslie Charleson) younger son, besides being responsible for so many bad things that happened to her older son, including being an accessory to his death. Still, Monica has to accept that Jason Morgan (Steve Burton) is going to marry Carly Corinthos and Carly isn’t quite sure she can believe Monica won’t cause trouble.

And Monica should cause trouble over what’s happened to AJ (Sean Kanan). Still, Carly is stunned when Monica tells her that whether she wants her as her daughter-in-law or not, it’s going to happen and she’s going to learn to live with it. Monica Quartermaine, what has happened to you? The old Monica would have never accepted this woman in her family.

As Jax (Ingo Rademacher) heads to Nixon Falls, Nina (Cynthia Watros) has to deal with the fact that Smike (Maurice Benard) told her he is in love with her and she has to reject him until he learns who he is. She already knows who he is, so she can tell him, but where would the soapy drama be?

On Monday, Nina is stunned when she walks into the Tan-O and sees something unexpected. Or is that someone unexpected? Did Jax get there sooner than anyone could blink? He was taking his own private jet, after all.

Back in Port Charles, Ava Jerome (Maura West) is just trying to go about her evening in her gallery when someone surprises her from behind. Is it her worst fear coming true? Did her stalker find her?

Elsewhere, Nikolas (Marcus Coloma) is surprised by a special delivery and we have a feeling both of these things are likely related. Is Esme responsible for both surprises? Josslyn (Eden McCoy) admits on Tuesday that she doesn’t trust the girl at all.

Sam McCall (Kelly Monaco) has a lot on her plate right now so it’s a good thing she always has a babysitter for her kids. On Tuesday, Curtis (Donnell Turner) and Sam discuss finding both Hayden (Rebecca Budig) and Drew (Cameron Mathison), but Curtis tells her there’s one catch in their plans.

Meanwhile, Jordan (Briana Nicole Henry) and Shawn (Sean Blakemore) put their heads together about the search for Hayden? Will Jordan actually be helpful? Stay tuned to General Hospital weekdays to see how these stories play out.