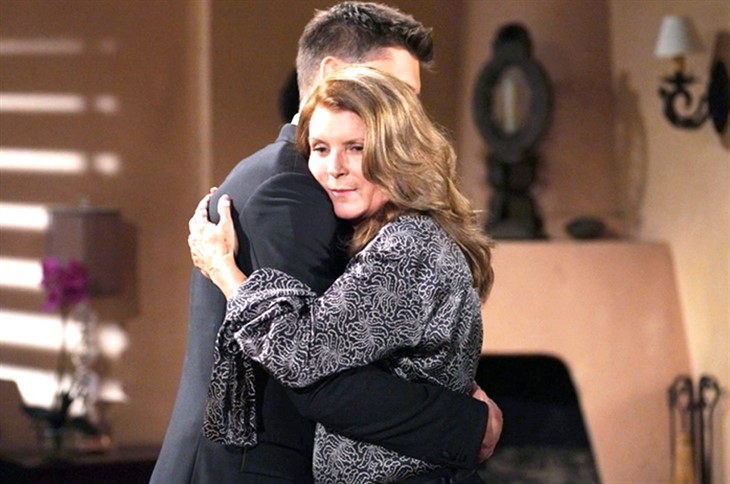 The Bold and the Beautiful spoilers reveal that Sheila Carter (Kimberlin Brown) suddenly faints. When she drops to the floor, John “Finn” Finnegan (Tanner Novlan) is overcome with emotion. Then, Sheila is diagnosed with a medical condition. Finn beelines to his birth mother’s side. Meanwhile, Steffy Forrester (Jacqueline MacInnes Wood) begs Finn to see through Sheila’s act.

The Bold And The Beautiful Spoilers – Sheila Carter Faints

B&B spoilers for the week of September 6 reveal that Sheila decides to put her next plan in action. First, she needs to get close to Finn or her plan won’t work because she needs the doctor to have an emotional reaction.

It is suggested that Sheila will show up at Steffy’s door and offer a sicky-sweet apology for everything. While Sheila says she’s sorry for holding Hayes Forrester Finnegan without Steffy’s permission, Finn probably thinks shows she’s not evil. However, Steffy can see right through Sheila’s facade and has no intention of letting her guard down for one second. Suddenly, Sheila faints and Finn watches as his mother’s body crumples to the ground.

Finn, being the caring guy that he is, will rush to his mother’s side. Steffy will probably try to get Finn to get away from her. While Steffy insists that this is just another one of Sheila’s cons, Finn can’t take that chance. He will probably say whether Sheila’s faking or not, it’s his duty to get her medical attention.

Sheila will likely wake up and pretend to be disoriented. Looking at Finn as he is tending to her, Sheila will try to get up. Finn is a doctor and won’t want her doing anything until she gets a medical screening. Sheila will say it’s not necessary, but Finn will insist. At this point, Sheila knows her plan is working better than she expected. Meanwhile, Steffy probably has a look of shock and disgust on her face.

The Bold And The Beautiful Spoilers – Medical Diagnosis Tugs at Heartstrings

The Bold and the Beautiful spoilers reveal that Sheila will either say she has a medical condition or is diagnosed with one. Sheila will need a diagnosis that will tug at Finn’s heartstrings. Something that will push him to spend time with her — and allow her to see Hayes — before time runs out. So, Sheila will probably fake a deadly disease like cancer or a brain tumor.

It is teased that Sheila’s plan works like a charm and she gets exactly what she wants… to be closer to Finn. In Finn’s mind, it would be cruel for him to abandon Sheila when she’s on her deathbed. However, Steffy knows that this is just one big scam. Concerned that Finn is actually falling under Sheila’s spell, Steffy begs Finn to see through Sheila’s act.

If she really does have a fatal illness, then Sheila won’t object to getting tested at another hospital or by an independent lab. Sheila might be able to blackmail or bribe someone at one hospital, but she would have a hard time covering every medical professional in Los Angeles. What will Finn do about this situation since he is smack in the middle of it? Will he take Steffy’s advice or insist that she’s being cruel to his dying mother?