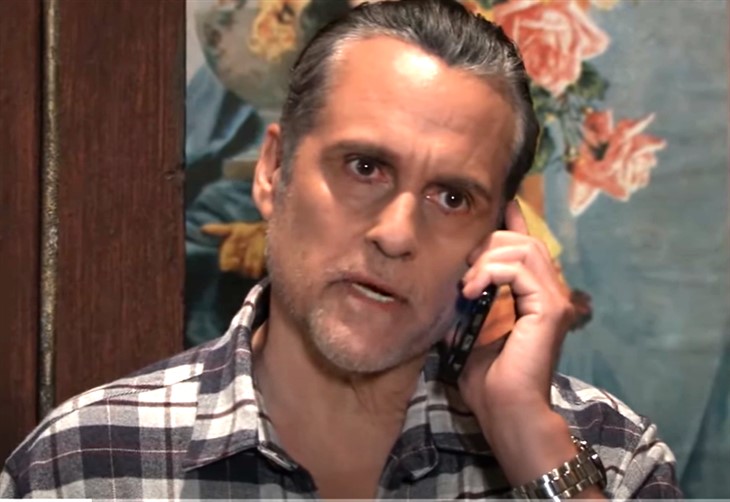 General Hospital spoilers for Tuesday, September 21, 2021, reveal the brand-new Mr. and Mrs. Jason Morgan ready to do the deed in what we assume is Sonny Corinthos’s bedroom and bed. But maybe Carly chose a new room since it’s a big house.

General Hospital Spoilers – Will Sonny Corinthos Get An Eyeful?

Just as Jason (Steve Burton) and Carly (Laura Wright) are falling into bed, Sonny (Maurice Benard) is walking up a short flight of stairs. Will he stop and look at pictures on the wall first? Perhaps stop in the bathroom to freshen up a bit since he’s looking a little rough?

We hope so because when he bursts into that bedroom, Jason and Carly better be in the midst of their wedding night fantasies come true. THAT will be soap opera and anything less than that would have wasted the last 10 months completely.

GH Spoilets – Over In Nixon Falls…

Sonny Corinthos might be back in Port Charles but Nina Reeves (Cynthia Watros), Valentin Cassadine (James Patrick Stuart), and Anna Devane (Finola Hughes) are still in Nixon Falls. And so is Peter August (Wes Ramsey). Anna even has a gun pointed straight at his chest and tells him he just needs to give her an excuse to shoot and she will do it.

Valentin races to find her and help her but perhaps he should leave this one to Anna on her own. Nobody deserves to take him down more. Still, rumors are out there that we are in for more misery with this character. We can only pray Anna completes that mission.

Harrison Chase (Josh Swickard) and Brook Lynn Quartermaine (Amanda Setton) continue to bond over Baby Bailey Louise. Brook looks like she’s even on the verge of telling him everything. She does say he may have the answers to what she’s been struggling with and Brook does deserve someone to confide in.

Meanwhile, Austin (Roger Howarth) continues to be Maxie Jones’s (Kirsten Storms) savior and Britt Westbourne (Kelly Thiebaud) notices it. She even thanks Austin for being so kind to Maxie. Knowing that Peter is out there now for sure has Maxie in a panic and in need of as much support as she can get. Stay tuned to General Hospital weekdays to see how these stories play out.