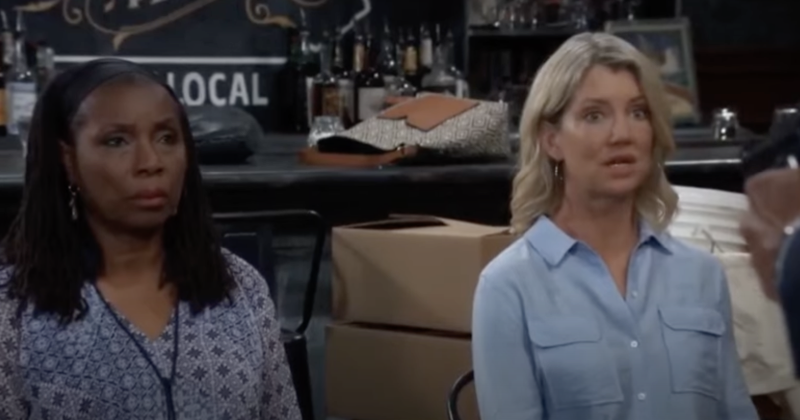 General Hospital (GH) spoilers for Tuesday, September 14, 2021, reveal the results of Phyllis not just completing the mission when she had the chance.

Phyllis (Joyce Guy) was able to size up Peter August (Wes Ramsey) in a second and knew she had to go for that gun behind the bar. She could have taken aim at Peter and not hit Nina (Cynthia Watros) like a good Jason Morgan (Steve Burton) but she just didn’t have it in her. Now, she and Nina are a bit tied up at the moment with Anna (Finola Hughes) and Valentin (James Patrick Stuart) on the way. We bet it takes them much longer to get to Nixon Falls than anyone else who has shown up there to surprise Nina.

Meanwhile, it looks like Jax (Ingo Rademacher) is still in town and that does not make Smike happy at all. He instinctively knows this is the man he had to fight for Brenda Barrett (Vanessa Marcil) all those years ago, the first (and perhaps only) love of Sonny Corinthos’s life. Mike quickly disappears when Jax is around and Sonny (Maurice Benard) comes out to play. Will he make some phone calls and have him deported or do they need to rescue Nina from that menace named Peter first?

Sam (Kelly Monaco) doesn’t even want to think about the fact that Jason is marrying Carly (Laura Wright) at some point before this very long Port Charles day ends. So, it’s a good thing Dante Falconeri (Dominic Zamprogna) is there to distract her with some time at the batting cages.

Apparently, Sam has forgotten about the fact that a presumed-dead Drew (Cameron Mathison) called her a few weeks ago because she barely gives this fact the time of day now. It’s a good thing Drew seems to be taking care of himself and might finally have a way out of his prison with the real Nurse Chloe.

Harmony tells Alexis she knows trouble when she sees it and we have a feeling Esme (Avery Kristen Pohl) decides to pay another visit to Ryan Chamberlain (Jon Lindstrom). Stay tuned to General Hospital weekdays to see how these stories play out.

90 Day Fiance Spoilers: Is Angela Deem Off the Show?