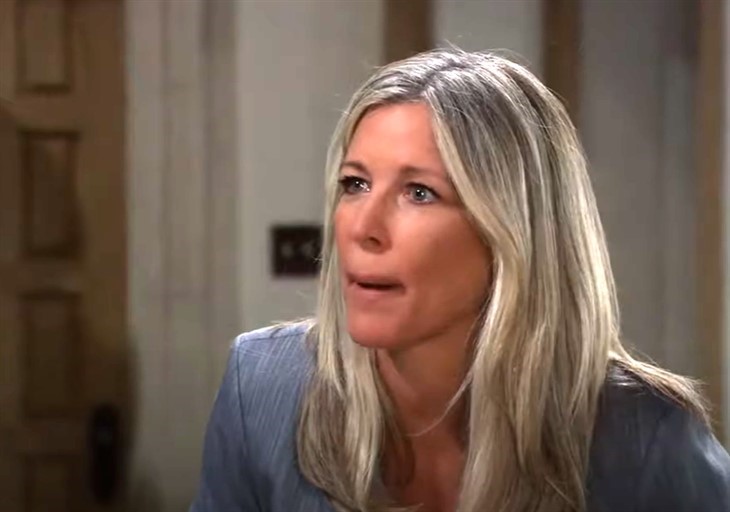 General Hospital (GH) spoilers for Tuesday, October 12, 2021, reveal Carly is ready to pounce on Nina and hurt her, forgetting about all the times she has done so much worse than what Nina did.

Carly (Laura Wright) can’t just be happy to have Sonny (Maurice Benard) back in her life and Jason Morgan (Steve Burton) all alone with no woman in his life doing her bidding. No, there is always someone in this world who has done more wrong to her than she has ever done to anyone else — at least in her own mind. And now she will not let Nina (Cynthia Watros) forget that she kept Sonny’s alive status a secret for months. (Someone better tell Carly that Sonny had no desire to find out who he was.)

Jason is the one who has to stop Carly from doing something she will regret, which probably has something to do with keeping Wiley from Nina. She wants Nina to know what it feels like to lose someone she loves. It doesn’t occur to Carly that Nina lost Nelle (Chloe Lanier) and Carly kept the fact that Nelle was her daughter from her.

Meanwhile, Nina is thrilled to have Phyllis (Joyce Guy) in town and tells her she is just going to have to find a way to forget about Mike…

The softer side of Sonny comes out when he is with Jax (Ingo Rademacher). For 25 years, these two men have hated one another and it all started over one woman, Brenda Barrett (Vanessa Marcil), who some would say is the real love of Sonny’s life.

But Sonny can’t forget that Jax helped him out in Nixon Falls and the two men reach a truce. Might Sonny also be curious if Jax can tell him more about the real Nina?

Ava Jerome (Maura West) might understand what it’s like to lose a child, but Nikolas Cassadine (Marcus Coloma) hasn’t really lost Spencer because he is alive. She just wants him to spend a few days in jail and throw some fear and consequences his way after what he did to her and Avery all those months.

Nikolas never expected Ava to have Spencer arrested, but Ava gives her husband some advice on how to handle the situation. Uh-oh. Stay tuned to General Hospital weekdays to see how these stories play out.