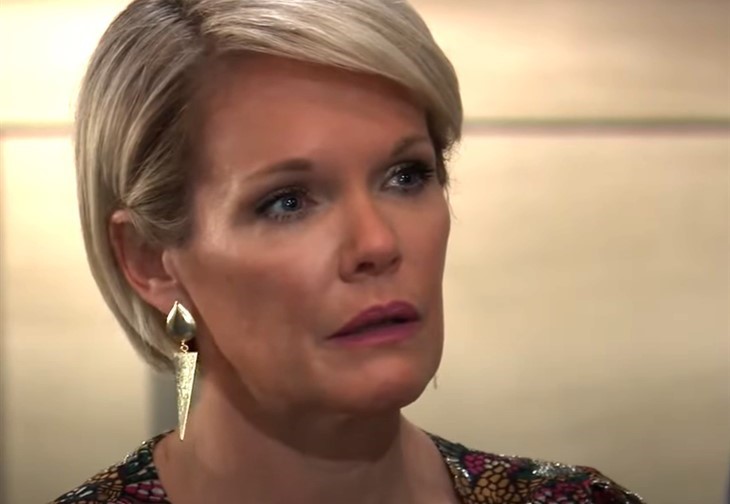 General Hospital (GH) spoilers and updates reveal Mrs. Cassadine is planning to leave town and put Kristina in charge of Charlie’s Pub. Fans are concerned that Maura West might be walking away from her popular character, but this has not yet been confirmed.

Maura West confirmed on social media that her character Ava Jerome Cassadine is planning to leave Port Charles and this caused alarm for Nava fans. Many GH viewers have been waiting for Spencer Cassadine (Nicholas Alexander Chaves) and Esme Prince (Avery Kristen Pohl) to be exposed and for Nikolas Cassadine (Marcus Columbo )and Ava to reunite. Now fans are seeking answers and want to know if Nava has a chance.

Ava has been talking about making her exit from Port Charles for quite some time. She gave Avery to Carly for safekeeping and has a restraining order against Nikolas. She has been setting her house in order and spoilers say she will decide on the fate of Charlie’s bar after talking to Kristina Corinthos Davis (Lexi Ainsworth). Ava’s departure is seemingly being delayed and perhaps she might not be going anywhere at all.

General Hospital Spoilers – No Confirmation On West Leaving The Soap.

There has been no confirmation that Maura West is leaving the ABC soap so there are several possibilities for Ava. She could leave town never to return or temporarily leave Port Charles and come back once Spencer and Esme are exposed. Perhaps everything will work in her favor and she can stay put and eventually reunite with her prince.

Ava Cassadine is a beloved GH character and her portrayer is a fan favorite. The chatter about Ava leaving Port Charles has some viewers wondering if her portrayer might be the disgruntled actress who was leaving her soap. So far nothing has yet been confirmed.