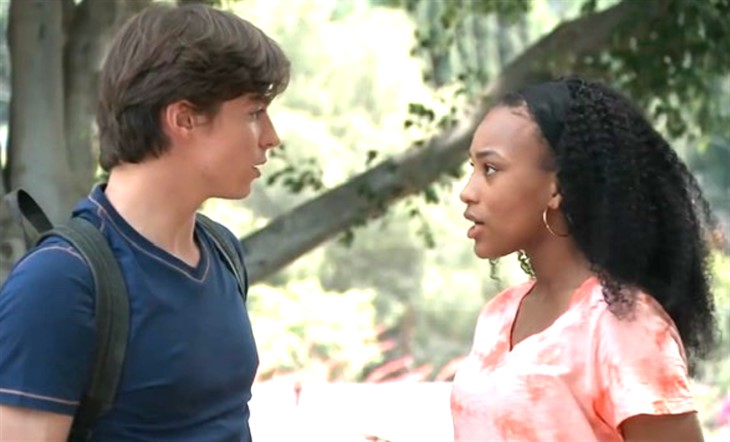 General Hospital viewers will recall that Trina was an indirect victim of Spencer Cassadine (Nicholas Chavez) and Esme Prince’s (Avery Kristen Pohl) schemes too. She took a direct hit from one of Spencer’s stalking pranks, as he did also when a “bloodbath” from the sprinkler system at Ava Cassadine’s (Maura West) art gallery was accidentally triggered! General Hospital viewers will recall that poor Trina arrived at her high school graduation party at the Savoy looking like the star of a slashing movie!

Trina also was flirted with by Spencer using an alias of “Victor” and not giving a clue that he already had an obviously serious girlfriend, let alone who he really was! Trina has been a strong cheerleader for Ava and Nikolas to stay together but understood Ava’s fear of the heretofore unknown stalker! General Hospital viewers know Trina has a big heart, but she’s thoroughly disgusted with Spencer and his psycho girlfriend Esme right now. Trina chooses to show her compassion to Ava and Nikolas, and in particular to Nikolas!

General Hospital viewers know that Spencer and Trina have a “dead daddy” story in common. Trina’s father – at least the one she grew up knowing as her father – also “played dead”. General Hospital viewers will recall how angry Trina was for having grieved Marcus Taggert (Réal Andrews) as having died, only to discover him alive and not keeping her in the loop! Of course, there were differences in Trina’s experience and Spencer’s. Marcus did so to protect Trina as this was during the mob war with Cyrus Renault (Jeff Kober).

Still, he snuck out of his self-imposed witness protection frequently to keep an eye on his daughter and evidentially he was caught doing so! Trina was mad for a while, but eventually got over it and reconciled with Taggert. But Taggert “played dead” only a few months whereas Nikolas played dead for several years, and Spencer was much younger when he disappeared. But she understands Spencer’s anger, and even though she’s mad at Spencer she can help Nikolas understand Spencer’s point of view without excusing Spencer’s actions and show Nikolas some compassion.

General Hospital viewers know that even though she understands where Spencer was coming from, she doesn’t feel sorry for him anymore! She knows that both Ava and Nikolas have a lot of love to give Spencer, if only he would receive it! Ava has reached out to Spencer before, but he won’t give up his grudge against her for not helping him take back the Cassadine legacy from Valentin Cassadine – (James Patrick Stuart) and that was when he was only ten or eleven years old!

True, that is a lot of years for hatred to fester – and probably the best thing for all would be for Spencer, Ava and Nikolas to go to family counseling! Kevin Collins (Jon Lindstrom) would be happy to provide it! Ava is pretty angry at Spencer and Esme herself, but she too understands where Spencer’s hurt comes from. She did sell him out at the time but in the end, Nikolas returned and took back what was rightfully his and Spencer’s by exposing Valentin as being a Cassadine in name only. General Hospital viewers know that there’s a lot of water under the bridge, but Trina will maintain her role as peacemaker between Ava, Nikolas and Spencer if Spencer will allow her to!