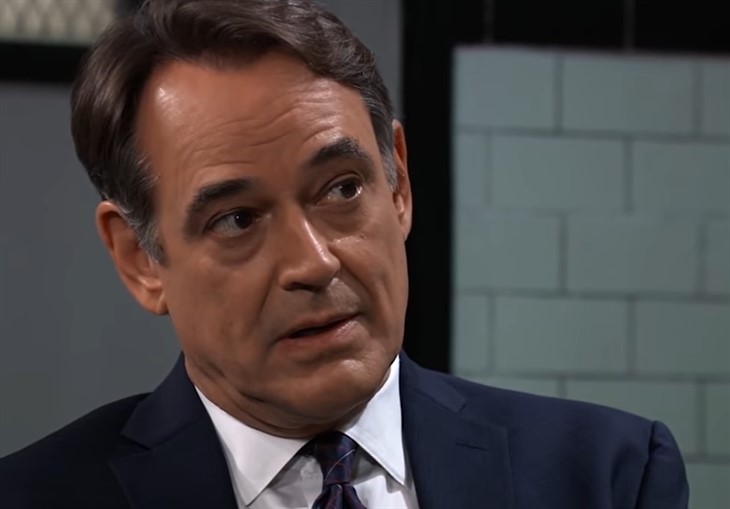 General Hospital spoilers tease that Dante Falconeri’s (Dominic Zamprogna) friends and loved ones may wonder if Dr. Kevin Collins (Jon Lindstrom) will be able to reverse Dante’s brainwashing in future episodes of General Hospital. There is a good chance that he may be able to!

Longtime General Hospital viewers and those who watched the General Hospital spinoff Port Charles will remember that Kevin’s father was a spy named Victor Collins (Nicholas Pryor). He later became a professor, but his frequent trips away from his family which consisted of Kevin, his twin brother Ryan Chamberlain (Jon Lindstrom) and wife Melanie Chamberlain (Joy Claussen) was on his spy trips. Kevin never knew about his father having been a spy until he was an adult, long after he had divorced Melanie. Melanie raised Ryan while Victor raised Kevin, which is why the twins have two last names.

General Hospital (GH) Spoilers: Violet Shattered, Plots To Get Anna And Finn Back Together?

General Hospital spoilers and recaps show Ryan took his mother’s maiden name. Victor had disappeared and when Kevin was married to Lucy Coe (Lynn Herring) she found him in a French convent and brought him back to Port Charles. Kevin had thought he was dead and had told Lucy so. Kevin probably knows a lot about brainwashing as well as post-traumatic stress disorder since psychiatrists are trained to deal with those unusual situations in case they arise as causative factors in other mental and emotional conditions.

We also know that General Hospital’s Kevin has books on hypnosis and post-hypnotic suggestion in his office, because that is where Ryan learned to plant post-hypnotic suggestions. That is part of brainwashing. Kevin also knew Dante’s psychiatrist in Geneva, Switzerland, Dr. Warren Kirk (Jameson Jones). Kevin was the one who referred Franco Baldwin (Roger Howarth) to him.

Dante’s kill switch was placed by post-hypnotic suggestion. That means that Kevin could place another post-hypnotic suggestion to at least reverse the first one. But he may have to discover what activates Dante’s kill switch, which is the clicking of a pen. Anna Devane (Finola Hughes) was working with Kevin to get some medical records previously, and she was sharing her information with Valentin Cassadine (James Patrick Stuart).

She will be working to get to the bottom of what happened to Dante, and so she will likely be working with Kevin. Valentin may be brought in as well, because he was the first one to notice something odd when he was trying to set up a playdate schedule with Dante for Rocco Falconeri (O’Neill Monahan) and Charlotte Cassadine (Scarlett Fernandez).

General Hospital rumors hint Valentin may remember clicking his pen as he was writing and be able to provide that very valuable clue to Kevin! Basically, what Kevin will have to do is to reverse-hypnotize Dante, so to speak. He will have to remove the post-hypnotic suggestion that activates his kill switch by implanting one to not attack when he hears the click of a pen. It is a complex process, but there is a good chance that he will be successful once he realizes that is what is causing Dante to become violent and aggressive.