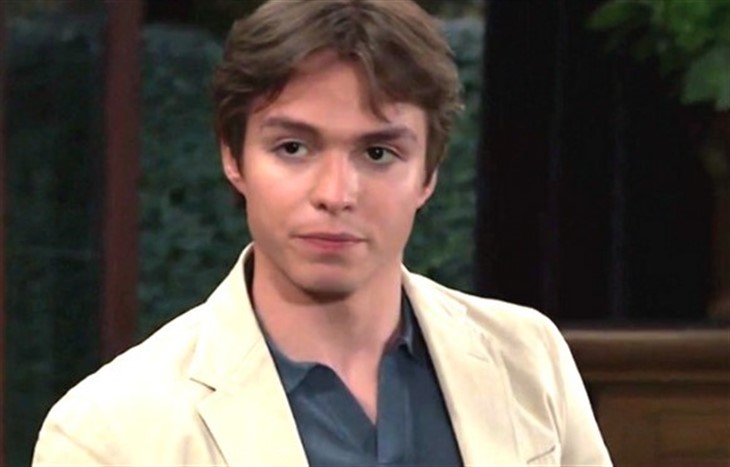 General Hospital viewers will recall that Nikolas and Alexis Davis (Nancy Lee Grahn) were shocked to find a returned letter from Ryan addressed to Spencer at his school in France. Nikolas and Sam McCall (Kelly Monaco) had been visiting Alexis at the same time and Alexis had told them about Harmony Miller (Inga Cadranel) helping Ryan communicate, including writing letters for him. General Hospital viewers will recall that several months ago before Ryan was stabbed in Pentonville Prison he had a return letter from Spencer even then. Sam went home, but Harmony brought a folder of Ryan’s mail and made a loud announcement that she hoped she hadn’t lost Ryan’s folder and would look for it later, for the benefit of the prison guard in the room. Nikolas and Alexis are shocked when she finds a returned letter from Spencer in the folder.

General Hospital viewers will note that Alexis will caution Nikolas not to jump to conclusions and confront Spencer over the return mail from Ryan. Both were shocked that Ryan wrote to Spencer, but Spencer never got the letter in question. Nikolas cannot help but wonder if Ryan wanted to work with Spencer against himself and Ava Cassadine, (Maura West) given the Ryan-like nature of the stalker’s “gifts” to break up his marriage to Ava. Nikolas and Alexis both seemed disturbed that Ryan would even have had the address to the school in France, but then as General Hospital viewers will recall, he could have obtained that when he was impersonating his twin brother Kevin Collins (Jon Lindstrom) for all those months – prior to which Laura Collins (Genie Francis) had been in France nursing Spencer back to health after he broke both his legs in a skiing accident. Laura arrived home briefly after getting Spencer set up in school to find her “husband” no longer wanted her.

General Hospital viewers know that Nikolas seldom listens to the advice of others and just kind of does his own thing, which has gotten him in trouble several times. Nikolas takes the letter with him from the prison, and arranges a meeting with Spencer. Even though Spencer indeed has been the stalker who copycatted Ryan in many of his stalking stunts, Spencer’s entire plan was very delicate and could fall apart easily. Spencer becomes nervous when his father shows him the letter, which is understandable since Spencer himself didn’t know about it, having never received it. Nikolas puts him on the hot seat but luckily for Spencer, usually his mind works faster than his nerves. He begins thinking quickly about a way to take the suspicion off of himself, since his father having this letter could ruin his whole plan to break up Nikolas and Ava. General Hospital viewers will recall that Spencer has wanted Ava and Nikolas to think that Ryan was the stalker, after all!

GH Spoilers – Nikolas Cassadine Offends His Son With His Accusations

General Hospital viewers know that Spencer has never lost his rather condescending attitude against others he considers not his equals, shown perfectly in his recent conversations with Cameron Webber (William Lipton) “the townie”. Nikolas doesn’t start off on the right foot to say the least, and in essence puts his foot in his mouth when he starts accusing Spencer of collaborating with Ryan, and possibly even carrying out the stalking incidents and the “gifts” at Ryan’s direction! Spencer is understandably offended – although actually his father isn’t far from the truth. Spencer didn’t get his ideas as orders from Ryan, at least not that he would ever admit. He blasts his father with guilt trip ridden phrases such as “what kind of father would accuse his own son of such a thing” and actually is hurt by the accusations even though they are at least partially true. General Hospital viewers know that as far as Spencer is concerned, it’s just another proof that Nikolas loves his wife more than his own son, and that truly does hurt!

General Hospital viewers can tell that Spencer has actually grown into a calculated liar, nearly as calculating as his accused-of mentor Ryan! Spencer reiterates that he returned any letters from Ryan unopened, and Nikolas backs down when he realizes that the letter was unopened and returned. However, he watches his father carefully for any signs that he may not have bought his story with a very strong poker face and even able to look him in the eye and lie to him.

This is the mark of a pathological liar – one who believes his own lies. Nikolas then apologizes to Spencer for being so quick to suspect him of collaborating with Chamberlain. Spencer is not as quick to forgive as Nikolas thinks he is, even though he accepts his apology. Spencer was truly hurt over the accusations but at the same time feels his father insulted him and that he owed him an apology. General Hospital viewers can tell that Spencer was much more hurt than he will let on, and Nikolas was truly wrong to keep him out of the loop in the years he faked his death. Deep down, Spencer is crying for love and attention from his father and wants him to prove it by divorcing Ava.