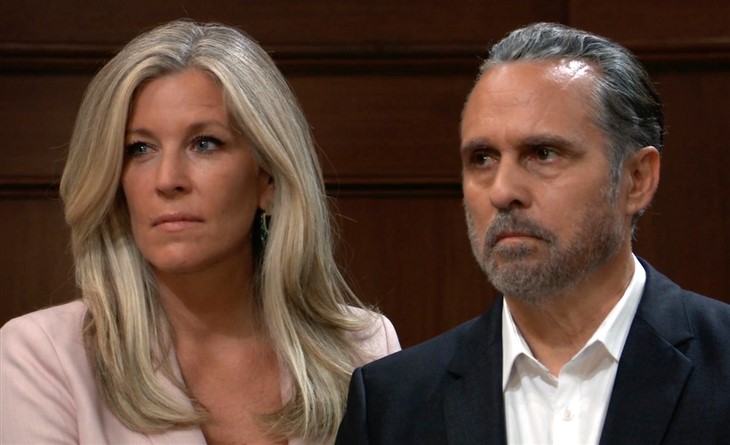 General Hospital (GH) spoilers tease that Sonny Corinthos (Maurice Bernard) is not the same man he was before his time at Nixon Falls. After off a footbridge and surviving days in the brutal cold, Sonny was rescued and taken to small town’s hospital. After realizing he couldn’t remember anything, he took on the name “Mike” and worked as a bartender for Phyllis Caulfield (Joyce Guy) who along with her husband, took “Mike” in exchange for his work at the bar.

Coincidentally, Phyllis already had another connection to Port Charles. For twenty years, Nina Reeves (Cynthia Watros) was comatose and under constant care. Phyllis was one of the nurses assigned to Nina. Phyllis’ heart broke when discovered that Nina was also pregnant. Nina’s family lied to Phyllis that she wanted to give the baby up for adoption. Phyllis was eventually assigned to drive the newborn to his new family in Florida. But when Nina finally woke. She was horrified to find out that she was pregnant and the baby given away.

GH Spoilers – Nina Reeves Journey To Find Her Missing Daughter Was A Treacherous One!

After many lies, false starts and dead ends; Nina finally found Phyllis. The two of them had an emotional reunion and Nina thanked Phyllis care of her and child. Phyllis felt awful for believing that Nina didn’t wWes ant her baby and for her part in delivering the infant to his new family. But Nina assured Phyllis that there was nothing to feel bad about. The two parted ways but promised to keep in touch often. A few months after “Mike” arrived in Nixon Falls, Nina followed suit. She was shocked that Sonny was not only alive but standing right in front of her. Nina knew that she needed to let “Mike’s” family how to find him. But Carly Corinthos (Laura Wright) was hateful to Nina before she could tell Carly so Nina hung up and never made the attempt again.

Nina made the decision to stay in Nixon Falls and she and “Mike” began to fall in love with Nina. She tried to discourage Mike at first, but she admitted she had fallen for “Mike” as well. Many times over the months, Nina had asked “Mike” if he wanted to find out his true identity. But every time, “Mike” told Nina he didn’t care. He reasoned that no one had come looking for him all that time, so he must not be missed. But soon, everything would change.

When Peter August (Wes Ramsey) set Phyllis’ bar on fire, with Phillis and Nina in it “Mike” came to the rescue! Both Phyllis and Nina were safe, but Sonny was trapped for several minutes when the roof fell on him. Sonny woke up with memory intact and somehow found the strength to free himself and escape the burning building.
Sonny was livid with Nina for her months of deception but instead of taking any kind of revenge, he opted to return home. Sonny had a miraculous reunion with his family, but that wasn’t enough for Michael Corinthos (Chad Duell).

Once he discovered that Nina knew where his father was for months, and kept it from him, he used his connections to Attorney General of Pennsylvania to pursue an identity theft charge again Nina. Nina was arrested. It’s been a couple months now and Carly still hasn’t been told that “Mike” and Nina were an item in Nixon Falls. But then Willow Tait (Katelyn MacMullen) over heard Sonny and Nina discussing their short-lived romance. It took a day or so but Willow realized it wasn’t her place.

GH Spoilers – The Courtroom Will Turn Into Chaos!

Willow, as well as the rest of her family and will wonder what information Willow could possibly have. But Nina will be immediately concerned. While Sonny has promised to tell Carly when the timing is a bit better. Now the choice has been taken from. Look for him to lash out at Willow and warn her to stay out of his business. Willow was faced with an impossible choice and she tried to protect Sonny as best she could. If Sonny is upset it’s his own fault for not telling Carly and although Sonny may not say it, he will know that Willow is right. And as she sees more of this side of the Corinthos family,. Willow may begin to regret staying with Michael!

Will Willow be forced to reveal Nina and Sonny’s big secret? Will Nina have to face a trial or will all charges be dropped? And will Nina find safety from an out of control Carly? Anything can happen in Port Charles so stay tuned to General Hospital airing weekdays on ABC. And don’t forget to check back right here regularly for all your General Hospital news, information and spoilers!