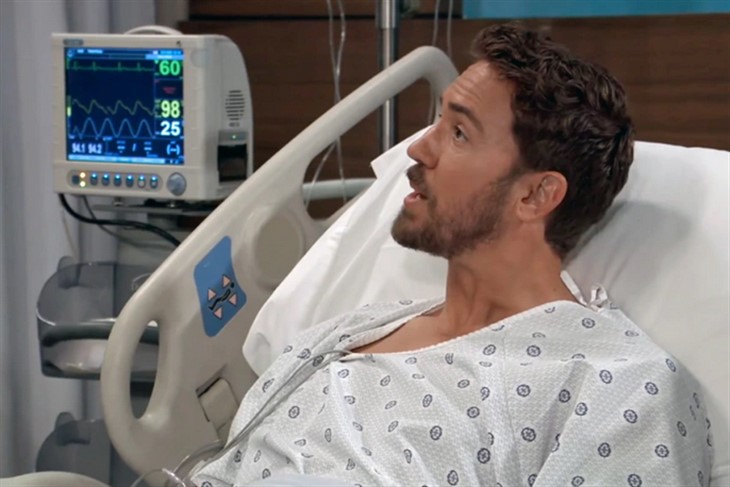 General Hospital (GH) spoilers reveal that Sonny Corinthos (Maurice Benard) made a deal to have Peter August (Wes Ramsey) killed in prison. It is teased that Peter might survive the poisoned prison meal. However, that means he will be hospitalized, which gives several people the opportunity to kill him. Will it trigger a murder mystery as the police investigate who killed Peter?

GH spoilers reveal that Maxie Jones (Kirsten Storms) wants Peter dead, which she shared with Sonny. After Maxie stormed off upset by the conversation, Sonny contacted Selina Wu (Lydia Look) and made an arrangement. As fans recently saw, Peter dramatically collapsed after eating a prison meal, which was served by none other than Brad Cooper (Parry Shen).

It is teased that Peter might not die from the poisoned food, or it could be a fake collapse. It is confirmed that Maxie will be at the hospital waiting for news. This could be regarding Sasha Gilmore’s (Sofia Mattsson) baby, but it’s more likely that it has to do with Peter. So, that makes it sound like Peter survives the poisoning or else he would have been pronounced dead by medics at the jail.

General Hospital spoilers reveal that it is also confirmed that Austin Gatlin-Holt (Roger Howarth) delivers news to Britt Westbourne (Kelly Thiebaud). It’s regarding a “patient of interest.” Who else could that patient be but Peter? What kind of news will Austin give Britt and what happens if the patient suddenly turns up dead in his own hospital bed?

Peter has no shortage of enemies and pretty much everyone in Port Charles would have a reason to kill him. Despite his evil deeds, the police would still be forced to treat it like any other death and conduct a full investigation. There could be a murder mystery coming up.

Actor Maurice Benard teased months ago that Nina Reeves (Cynthia Watros) would have an epic redemption story. Nina’s guilt has been shown a lot lately and Nina herself even mentioned that she needs to earn redemption. Right now, Nina seems to think that means going to prison. Nina also blames herself for taking Peter’s blackmail, which ultimately led to Liesl Obrecht’s (Kathleen Gati) hostage situation and Jason Morgan’s (Steve Burton) death.

So, when Nina finds out that Peter’s in the hospital, could she use that opportunity to get rid of him once and for all? Would killing Peter give Nina the redemption story that she needs? We will have to keep watching the ABC soap to find out.

B&B Spoilers: Taylor And Deacon Can Change Everything For Everyone