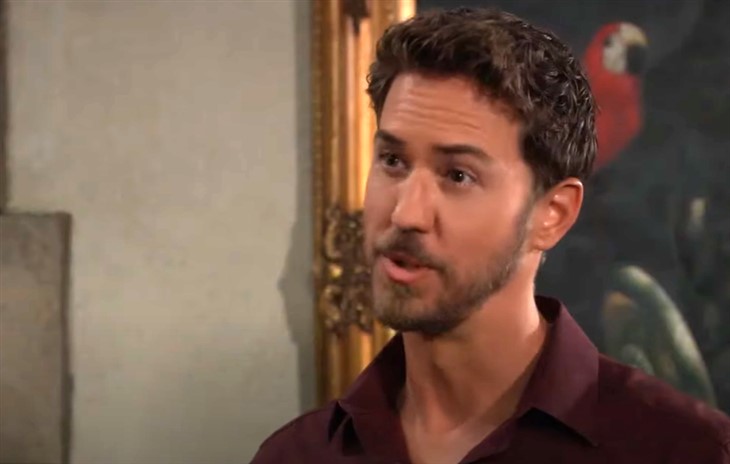 General Hospital spoilers indicate that Drew Cain (Cameron Mathison) may return in his programmed attack mode at the Nurse’s Ball. Peter August (Wes Ramsey) wants to unleash Drew where he can do the most damage, can he be stopped?

General Hospital’s Peter seems to have full and complete control over Drew at the moment. Peter has found the trigger for Drew’s conditioning and is taking full advantage of his inability to refuse to cooperate. Drew has allowed everyone to believe that he is dead and has left the sight of his shooting with Peter willingly. Peter and Drew also have Liesl Obrecht (Kathleen Gati) drugged and captive in the truck of Peter’s car. However, the WSB as well as Jason Morgan (Steve Burton) and Britt Westbourne (Kelly Thiebaud) are looking for Leisl. Peter is in the sites of everyone involved and it’s a matter of time before he gets caught. Will Drew carry through with Peter’s dastardly deeds?

General Hospital’s Drew thought that he could fight off Peter’s influence. After all, Liesl tried to tell Drew how to hold on to himself instead of giving in to the programming. So far it doesn’t seem like Drew is making much progress in his efforts. However, several of Drew’s loved ones are likely to be at the Nurse’s Ball, and hopefully thinking of his daughter can help him gain control before anyone gets hurt. After all, Drew used to date Liz Baldwin (Rebecca Herbst) and even married her to Franco Baldwin (ex-Roger Howarth). Sam McCall (Kelly Monaco) is Drew’s ex-wife and is likely to be there as well. Drew isn’t going to want other of these ladies to get caught in the crossfire. Will Drew regain control in time to save the day?

General Hospital’s Peter could make the huge mistake of going after Bailey Quartermaine (Odell-Diaz Twins). Unfortunately for Peter, Scout Cain (Ella Ramacieri) is often at the Quartermaine mansion and could be the key to breaking Drew’s conditioning. Drew could enter the house of Monica Quartermaine (Leslie Charleston) who he dearly loves. Drew considers Monica his mother and has for years. Drew would not hurt Monica by any means. Will Monica or Scout be the one to stop Peter’s reign of terror by breaking through Drew’s programming?

Drew may even come face to face with Jason Morgan (Steve Burton) who could get through to him. After all, Drew and Jason are twins, they should have a connection that no one else has. Will the brothers join forces and take Peter down ending his murderous plans for the Nurse’s Ball?

Days Of Our Lives (DOOL) Spoilers: MarDevil Wreaks Havoc All Over Salem