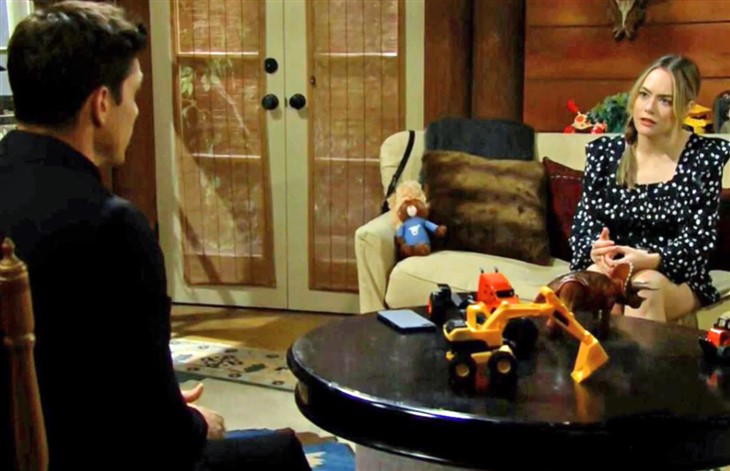 The Bold and the Beautiful (B&B) spoilers for Friday, October 22, 2021, reveal more bonding for Finn and Hope as they have a similar dilemma, but things are about to get oh-so-much more complicated.

Despite Steffy (Jacqueline MacInnes Wood) telling him all the horrible things Sheila Carter (Kimberlin Brown) has ever done, Finn (Tanner Novlan) still has a desire to know this woman who claims she gave birth to him. He always wanted to know who his biological mother was and never imagined he’d find this, but that curiosity is still there. Yes, he promised Steffy that Sheila would never be a part of their lives, but that doesn’t stop his feelings.

Now that Paris Buckingham (Diamond White) is gone, at least he has a friend in Hope Logan Spencer (Annika Noelle). While Hope has always known her father, they have never really been close and now she finally has the chance. Of course, all Logan and Liam (Scott Clifton) are warning her against seeing Deacon (Sean Kanan), so she kinda gets where Finn is coming from.

What neither one of them expects to find is Sheila and Deacon together — kissing, no less. Will this change their opinions about their respective parents?

B&B Spoilers – Eric Forrester Is In His Feels

After deciding he wanted Quinn Fuller (Rena Sofer) to stay with him and not sleep with Carter Walton (Lawrence Saint-Victor) after all because he doesn’t want to be all alone, Eric (John McCook) is stunned to learn he doesn’t have to be alone after all. His ex-wife Donna is still in love with him. How could he have ever guessed this? It’s not like Donna (Jennifer Gareis) ever let on and their marriage came to an end so many years ago.

Of course, he still has the same problem he’s had all these months with Quinn. If he does decide to just dump Quinn and be with Donna Logan, will this condition suddenly clear up? Or will he realize he can be a creative designer after all and please Donna in other ways? The possibilities are endless, after all. Or are they? Stay tuned to The Bold and the Beautiful weekdays to see how these stories play out.