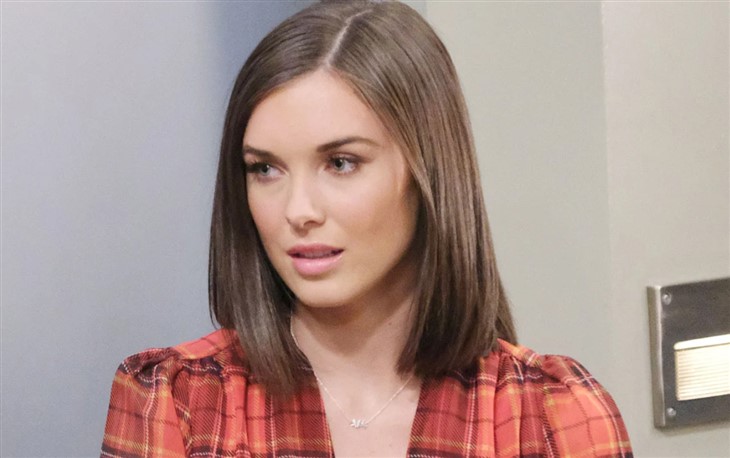 General Hospital (GH) spoilers for Monday, December 27, 2021, reveal Willow being put on the spot on the witness stand, but will she cave and tell the truth?

When the prosecution called Willow Tait (Katelyn MacMullen) to the stand at Nina Reeves’ (Cynthia Watros) preliminary hearing, she walked up there willingly ready to defend Michael Corinthos (Chad Duell) and the donation he gave the Pennsylvania politician, even though she didn’t like what he did to begin with. This is exactly what Scott Baldwin (Kin Shriner) wanted because he knows he can cross-examine her.

When Scott gets his turn with Willow, he does everything he can to try to get her to admit that she knows Nina and Sonny Corinthos (Maurice Benard) fell in love during their time in Nixon Falls. Will Willow fall apart on the stand and spill all, leaving Carly Corinthos (Laura Wright) wanting to commit murder or at least harm Nina severely?

Curtis Ashford (Donnell Turner) remembers how easy it was to solve mysteries when he had Drew Cain (Cameron Mathison) by his side and he really wants to learn the truth about why his father left his family and faked his own death. So, Drew and Curtis decide to team up and get to the bottom of things with Marshall (Robert Gossett). Perhaps Curtis will regret giving up his PI business with Sam McCall (Kelly Monaco).

Speaking of Marshall, he was so impressed by hearing Epiphany Johnson (Sonya Eddy) sing at the hospital just before Christmas that he has an offer for her and it may be one she’s unable to refuse.

Now that Laura Collins (Genie Francis) is back, she needs to fix the mess that is in her family and starts with grandson, Spencer Cassadine (Nicholas Chavez). She tries talking some sense into him about his girlfriend and his feelings towards Ava Jerome (Maura West) and his father. Might she also warn him not to leave town before starting his time at Spring Ridge?

Over at Monica’s house, Ned Quartermaine (Wally Kurth) tells Brook Lynn Quartermaine (Amanda Setton) he forgives her, but he has no idea of the other big secret his daughter is hiding. Stay tuned to General Hospital weekdays to see how these stories play out.

Days Of Our Lives Spoilers: Christmas Miracles And Nightmares Throughout Salem