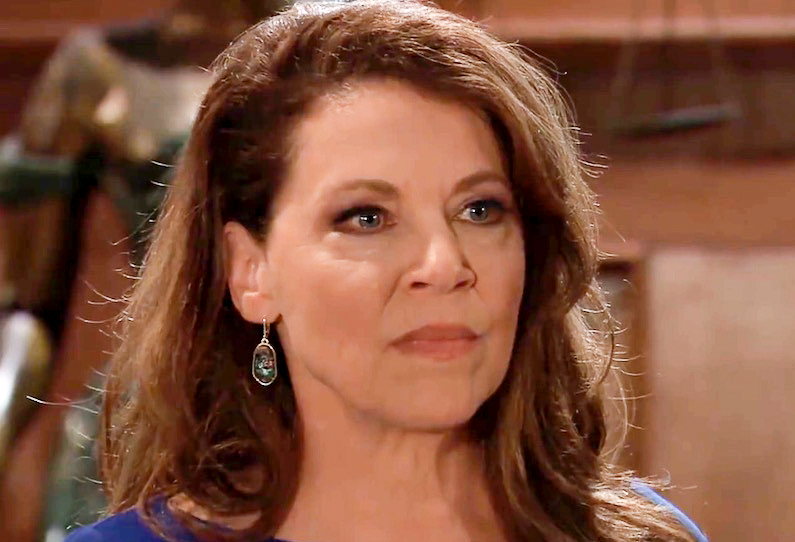 There’s nothing more that Liesl (Kathleen Gati) wants or has wanted for years more than to see Faison’s son, Henrik, dead and buried. Yes, she probably should have just done away with him back in 2018 when she kept him tied to the bed the whole summer to torture him and he ended up looking like an unshowered Paul Bunyan when it was over.

Finally, Liesl decided she would just program Dante Falconeri (Dominic Zamprogna) to kill Peter (Wes Ramsey). She had him brainwashed and he was ready to kill with the click of a pen. Too bad Dante wasn’t able to complete the mission after Sam (Kelly Monaco) broke the spell. So, now Liesl is just going to take matters into her own hands and complete the darn mission herself because someone has to do it. It’s not like Elizabeth (Rebecca Herbst) and Finn (Michael Easton) succeeded.

Over in Nixon Falls, Nina (Cynthia Watros) promises Peter that she will never double-cross him. After all, she knows how terrible and dangerous he is as he twirls his invisible mustache. Sonny (Maurice Benard) also declares that Peter must know who is. Lo and behold, Sonny is right.

Back in Port Charles, Anna (Finola Hughes) vows that she will find Peter — dead or alive. (We were thisclose to dead, but…)

The search for Drew Cain (Cameron Mathison) heats up as Anna gives Dante the WSB file about Drew’s plane crash and he and Sam start digging. What will they find?

Meanwhile, Jordan (Briana Nicole Henry) has a warning for Jason (Steve Burton). Cyrus (Jeff Kober) is planning something that could put his and Carly’s (Laura Wright) lives in danger. For someone in jail, Cyrus can sure cause a whole lot of trouble.

Maxie Gets A Baby Fix

Now that she’s back in PC, Maxie (Kirsten Storms) is trying to keep her mind off the fact that her baby is hanging out in Monica’s house by planning Jason and Carly’s wedding. So, she’s at the Metro Court again when Brook Lynn (Amanda Setton) stops by and gives Maxie another chance to see Baby Bailey Louise. Will anyone figure out the truth any time soon? Stay tuned to General Hospital weekdays to see how these stories play out.