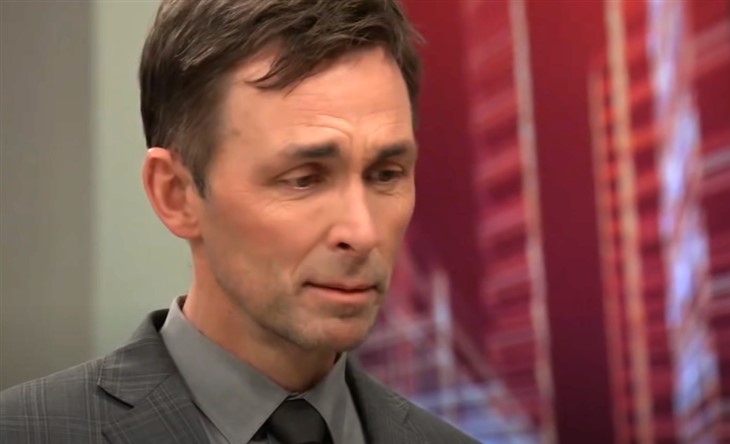 General Hospital (GH) spoilers for Monday, November 22, 2021, reveal another November sweeps day where everything seems to happen all at once both in and out of Port Charles.

General Hospital Spoilers – Harrison  Chase Steps Up To The Plate

Brook Lynn Quartermaine (Amanda Setton) was not expecting Harrison Chase (Josh Swickard) to walk in and announce he was Bailey Louise’s father just to keep Valentin Cassadine (James Patrick Stuart) from learning Brook Lynn never even gave birth and Bailey is really Maxie Jones’ (Kirsten Storms) baby. The problem is, Valentin doesn’t believe him. Will he demand a paternity test?

Once alone, Chase has to explain to Brook Lynn that he figured it all out after talking to Bobbie Spencer (Jacklyn Zeman) and learning what her birth plans were. It finally all made sense to him then and he is determined to protect Maxie’s baby, but is still furious at Brook Lynn for all the lies.

GH Spoilers – What Will Happen To Sasha Gilmore And The Baby?

Things take a turn for the worse for Sasha Gilmore (Sofia Mattsson) after her C-section when she begins hemorrhaging and Brando Corbin (Johnny Wactor) is not sure if she is going to make it. Their baby also seems to be in distress and Maxie has to be there to comfort Brando. She also places a call to see how Georgie and James are doing, her other children she doesn’t seem to think about much.

As Nina Reeves (Cynthia Watros) waits for word on Sasha and her baby, she ends up with Sonny Corinthos (Maurice Benard) again as she can’t seem to stay away from Charlie’s and neither can he. It’s like they are at the Tan-O all over again.

Elsewhere, Carly Corinthos (Laura Wright) runs into Jasper Jax Jacks and he has news for her. He is leaving town, which will be the end of Ingo Rademacher’s time on the soap.

GH Spoilers – Over On Cassadine Island

Jason Morgan looks down for the count after a beam fell on him in a Cassadine Island tunnel. In fact, every one of Peter August’s (Wes Ramsey)hostages looks down for the count. But never fear, Anna Devane (Finola Hughes) and Robert Scorpio (Tristan Rogers) are here. Can they save Jason or will this also be the end of Steve Burton’s time on the soap? Stay tuned to General Hospital weekdays to find out.