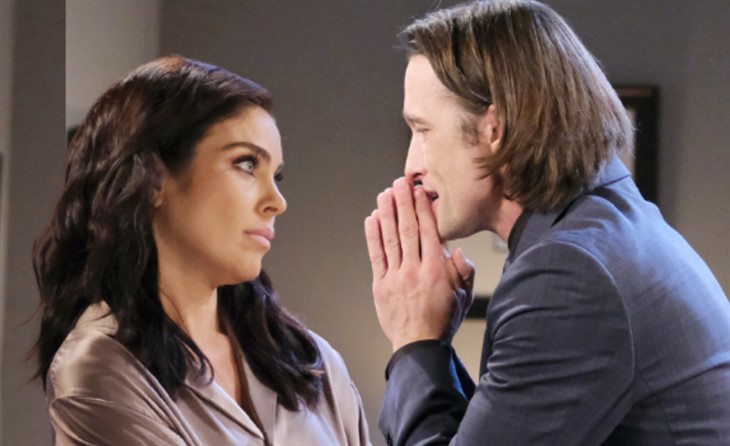 Days of Our Lives spoilers reveal that Philip Kiriakis (Jay Kenneth Johnson) let his jealousy get the best of him. He is on thin ice with Chloe Lane (Nadia Bjorlin) and needs to take action to save his relationship. Philip invites Chloe to a romantic picnic. However, that’s not all Philip has planned. Chloe gets a special surprise that not only impresses her, but gets her excited.

DOOL spoilers reveal that ever since Chloe chose Philip, his jealousy has been increasing and intensifying. Their whole relationship consists of three people: Philip, Chloe and Brady Black (Eric Martsolf). In the beginning, Chloe was hoping that Philip would get over his fixation on Brady. However, it has gotten worse instead of better and Chloe is just about fed up.

Philip decides to take drastic action to fix his relationship before Chloe breaks up with him. Philip plans a romantic picnic for Chloe, which she agrees to go on. For the first time, Chloe is seeing a more grown-up Philip instead of the jealous boy he’s been acting like. The two have a really good time, but that’s not the best part of the day.

Days Of Our Lives Spoilers – The Past Meets the Future

Days of Our Lives spoilers reveal that Philip brings along a sapling for them to plant. As longtime fans recall, Philip and Chloe carved their initials in a tree many years ago. However, Philip ended up cutting it down. So, the sapling not only represents their past romance, but their future as well. Bjorlin explains to Soap Opera Digest,

“He’s basically saying, ‘Listen, I can get past my jealousy. Let’s start over again. I know I’ve been petty and I cut the tree down back in the day but this is a grown man version of myself. Let’s start over.’ It’s a symbol of his love and affection and saying, ‘We’re in this for the long haul.’”

Chloe is so excited by the sapling, especially when Philip says they can watch it grow over the years and one day, carve their initials in it. It really makes Chloe believe that they can get past their current issues with Brady. It gives her hope that they might actually have a long-term future together.

However, Brady isn’t completely out of the picture yet. Although Bjorlin says that Chloe hopes this is the beginning of something beautiful, Chloe does still feel a pull toward Brady. So, we will have to keep watching to see which man Chloe ultimately ends up with: Philip or Brady.