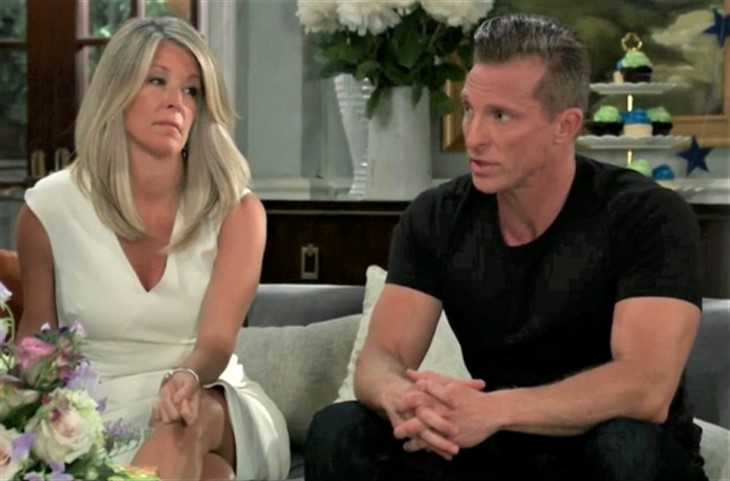 General Hospital (GH) spoilers for Thursday, September 23, 2021, reveal Jason and Carly Morgan trying to love on with their lives after they thought they would be man and wife in every way.

General Hospital Spoilers – SonnyCorinthos’s Back, So That’s That

Not two weeks ago we were led to believe that Carly (Laura Wright) and Jason (Steve Burton) have always been in love with one another and repressing their feelings for decades. With Sonny gone and a mob to run, they had the perfect excuse to get married and give in to those feelings.

Welp, now Sonny is back and there goes the wedding night. His adult children were thrilled to see him while they kept the smaller kids in the dark and now Sonny tells Carly he will never leave her again. Carly responds by telling him there are never any guarantees, especially in his line of work.

Meanwhile, Jason decides to blow off some steam at the gym where he of course runs straight into Britt Westbourne (Kelly Thiebaud), who is also blowing off steam. He tells her what happened and Britt coyly asks him how he just stops feeling his feelings. Britt, don’t go there again.

GH Spoilers – Nina Reeves Makes It Back From Nixon Falls

We guess we won’t be seeing Nixon Falls anymore because it has somehow been erased along with The Tan-O. As Jax (Ingo Rademacher) and Valentin Cassadine (James Patrick Stuart) discuss all of Nina Reeves’ (Cynthia Watros) many mistakes, Nina makes her way over to Maxie Jones’ (Kirsten Storms) place and tells her friend all the terrible things she did. And one terrible thing resulted in Peter August (Wes Ramsey) getting away — again.

Elsewhere, Anna Devane (Finola Hughes) receives a chilling phone call. Might it be mustache-swirling, hissing Peter on the other end taunting her in a cartoon villain way?

General Hospital Spoilers – Trina Robinson Has It All Figured Out

After her discussion with Esme, Trina (Sydney Mikayla) thinks she knows who has been stalking Ava Jerome (Maura West). It’s been Spencer Cassadine (Nicholas Chavez) all along, but he had help and that help was Esme. Now, Trina needs Cameron Webber’s (Will Lipton) help in order to prove it. Little does she know that Esme is picking Kevin’s (Jon Lindstrom) brain about…mental health? Stay tuned to General Hospital weekdays to see how these stories play out.