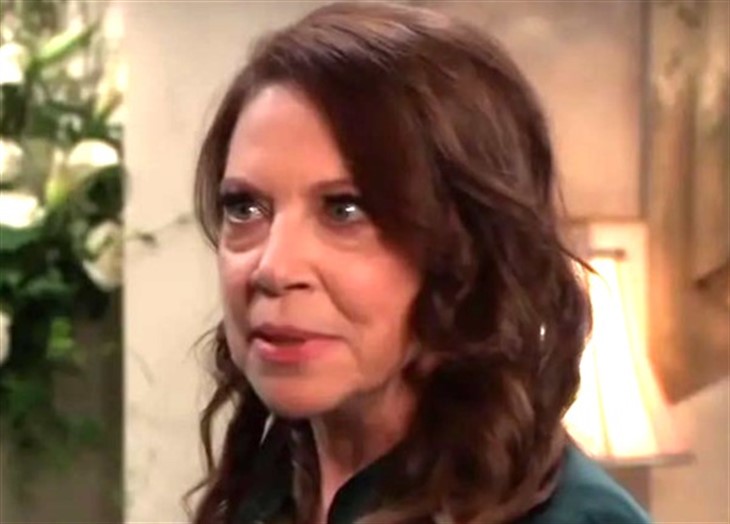 General Hospital’s Liesl Obrecht (Kathleen Gati) is about to blow Nina Reeves (Cynthia Watros) and Sonny Corinthos’ (Maurice Benard) romance secret out of the water. Will Scott Baldwin (Kin Shriner) use this to assure Nina’s freedom?

General Hospital’s Liesl wants to give Scott leverage to help with Nina’s case. However, Nina and Sonny have been trying to keep their relationship a secret. Sonny has not told Carly Corinthos (Laura Wright) anything about falling for Nina. Sonny wants to move on with his life with Carly but this secret could put an end to that. Scott feels that Sonny being a part of this romance.

Sonny being in a relationship with Nina could very easily clear Nina’s name. Sonny wasn’t trying to find his family on General Hospital. Sonny didn’t want answers to who he was or if he had a family out there. Can Nina be to blame for this? Scott believes this information offers him a very good chance of getting this case thrown out.

General Hospital’s Liesl wants to protect her relationship with Nina and begs Scott to keep her name out of this. Liesl is more than willing to go to bat for Nina but she doesn’t want Nina to think she has betrayed her confidence. Liesl certainly is not afraid of Carly and would go head to head with her over Nina anytime. Liesl isn’t afraid of anyone and doesn’t see Carly as any sort of threat toward her. Frankly, Liesl believes she could squash Carly like a bug to protect Nina.

General Hospital spoilers hint Carly is not going to act well to the truth when it comes out. Carly still believes that this is Nina’s fault. After all, Sonny didn’t know who he was and Nina got with him to hurt her. Carly is no fool. Carly knows that Nina wanted to get even with her and she believes this is it.

Carly may be upset with Sonny when she learns that he lied to her about his relationship with Nina on GH, but she still believes it is Nina’s fault. Will Carly’s reaction to the truth push Sonny into Nina’s arms? Can Carly fault Sonny for falling to Nina when she fell for Jason Morgan (ex-Steve Burton) as well?

Carly and Sonny have been through a great deal in all their years together. Can Sonny and Carly get past this and move on? Will Sonny and Carly work things out after all?