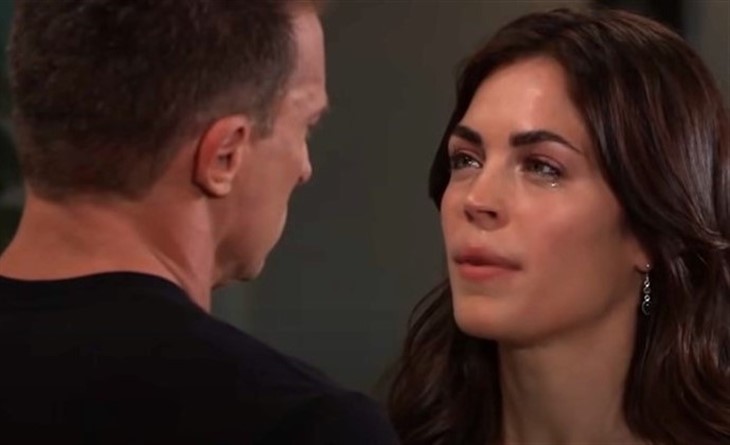 General Hospital spoilers tease that Carly Corinthos (Laura Wright) and Sonny Corinthos (Maurice Bernard) may have a huge obstacle in their marriage. As Sonny’s relationship with Nina Reeves (Cynthia Watros) while he had amnesia in Nixon Falls comes out, Carly will likely want to rely on Jason Morgan (Steve Burton). As viewers know, while Sonny was gone, Carly and Jason fell in love and actually got married. Carly and Jason went back to being friends, but those feeling will not just disappear especially for Carly.

At the moment, Jason has travelled to Greece with Dr. Britt Westbourne (Kelly Thiebaud). Britt has asked Jason to assist her in locating her missing mother, Dr. Leisl O’Brecht (Kathleen Gati). There will likely be quite a but of danger as the two of them get closer to finding Peter August (Wes Ramsey). This could stir up their old romantic feelings. But Jason has to know that if he leaves Britt alone again, especially at Carly’s request, Britt will never forgive him.

GH Spoilers – Carly Corinthos Will Be devastated If Jason Morgan Ignores Her Request!

Carly believes that she will continue to always come first with Jason. Many of Jason’s past relationships ended at least partly because Carly always came first. But Jason has just been reminded that no matter the connection between himself and Carly, Sonny and his business will always keep them at a certain emotional distance. With Britt, Jason has actually opened up about his feelings. He’s still the same man he always was, but he’s a lot more open with Britt than he has been with anyone else, with the exception of Carly.

Jason is also quite aware of how much he hurt Britt. After they made love the first time while on the run, Jason was called back to Port Charles by Carly and he left Britt alone. When Britt was able to return home, she still believed there was a future for herself and Jason, but that’s when Jason told her that he was going to marry Carly. Britt did her best to keep a strong face, but she was hurting inside. Jason won’t do that a second time, even if it means finally saying no when Carly calls.

Will Britt and Jason get romantic once again? Or will Carly summon Jason back to Port Charles? Will Jason choose Carly or stay with Britt? Anything can happen in Port Charles so stay tuned to General Hospital airing weekdays on ABC. And don’t forget to check back right here regularly for all your General Hospital news, information and spoilers!

My Big Fat Fabulous Life Spoilers: Jessica Powell And Her Fiance – What We Know

Days Of Our Lives (DOOL) Spoilers: The Rise Of The Walking Dead In Salem