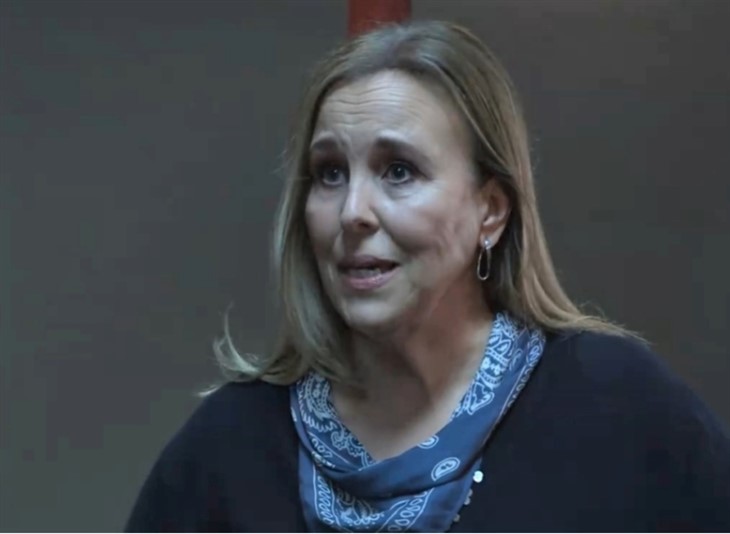 General Hospital (GH) spoilers tease that Laura Collins (Genie Francis) will sit Spencer Cassadine (Nicholas Chavez) down and try to talk some sense into him as only she can in an upcoming episode of General Hospital!

General Hospital viewers know there are going to be several things on Laura’s mind when it comes to Spencer, and one very important one is a warning! Laura doesn’t trust Victor Cassadine (Charles Shaughnessy) as far as she could throw him, and she wants to warn Spencer not to believe “Uncle Victor” about anything he says! General Hospital viewers will recall that Victor thought he might be able to help Spencer with his upcoming court hearing and the last thing Laura would want is for Spencer to take that kind of “help”.

Victor had also wanted to put up Spencer and Esme Prince (Avery Kristen Pohl) at a Metro Court Suite but Spencer had refused him on that one initially, although he said he’d talk to Esme. It’s likely that Esme prods him to take up his great-uncle on the offer. Since Esme and Spencer had been staying with Kevin Collins (Jon Lindstrom) Laura would find Victor’s offer to be suspect – and that might just be what prompts her to try and talk some sense into Spencer! By this time Esme may have talked him into it!

General Hospital viewers know that Laura will have some very strong opinions about Esme as well – and one thing that will no longer happen if Kevin’s been allowing it, is Esme and Spencer sharing a bedroom! Laura’s no prude, and even though she will learn Esme didn’t dump him like a hot potato when he lost his trust fund, she’ll want to check her background out and who her parents are, how she was raised, and everything about her.

General Hospital viewers know she may not have been so hyper vigilant over the love lives of Nikolas or her other two children, but for the most part she knew all their boyfriends and girlfriends, that is in the years when she wasn’t catatonic. Grandma Laura might want to make sure she does right what she perhaps did wrong or didn’t do at all as Mama Laura, as many grandmas do! Laura will ask Spencer a lot of questions about Esme and she will give her a proper interrogation as well!

General Hospital viewers know that Laura was gone for a while – and missed a lot! No doubt Kevin has caught her up on Spencer facing charges and having been the stalker that was after Ava Cassadine (Maura West) and trying to break her and his father’s marriage up! He’s still covering for Esme who was the real culprit behind Ava’s car catching on fire and planting a fake work badge, undoubtedly from human resources at General Hospital off of Kiki Jerome’s (Hayley Erin) HR records.

That was just outright cruel! Laura will certainly have a lot to say to Spencer about the scary “gifts” that reeked of Ryan Chamberlain, (Jon Lindstrom) even to include a talking teddy bear with Ryan’s voice left for little Avery Corinthos-Jerome (Ava and Grace Scarola)! That one still hasn’t been explained, although Spencer probably used voice disguising software to give the bear a voice! Spencer’s already had some serious talking to’s from Nikolas, Ava, and even Sonny Corinthos (Maurice Benard) but none of those were anything to compare to the one he’ll get from Grandma Laura!