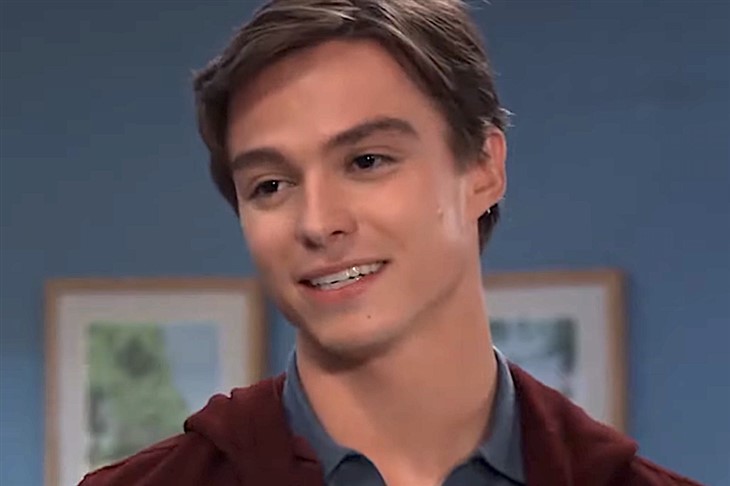 General Hospital spoilers tease that Spencer Cassadine (Nicholas Chavez) will have a shocking surprise visitor in an upcoming episode of General Hospital!

General Hospital Spoilers – Spencer Cassadine’s Been Touring Europe, Came To Port Charles And Got A Girlfriend

General Hospital viewers will recall that Spencer’s been touring Europe, came back to Port Charles “undercover” and even got a girlfriend – all since his grandmother, Laura Collins (Genie Francis) has been in protective custody of the FBI along with her half-brother Martin Grey (Michael E. Knight). General Hospital viewers will also recall that Laura raised Spencer for over five years, when his father, Nikolas Cassadine (Marcus Coloma) had been presumed dead.

General Hospital spoilers tease Laura has had no idea what her grandson has been up to since she’s been gone, but when she arrives back in Port Charles, she’ll be given a really quick update by her husband, Dr. Kevin Collins (Jon Lindstrom). When Laura finds out what her grandson has been up to, and that he’s working at Kelly’s like all the kids he used to look down his nose at and call “townies” she’s going to want to check out how that’s going, and she’ll blindside Spencer when she shows up at Kelly’s! He might even drop a tray!

General Hospital viewers can imagine that Laura will see Spencer’s been forced to have a slice or two of humble pie since she’s been gone – and she thinks that’s exactly what he needs! The privileged prince is now a pauper since he “divorced” his father because his father wouldn’t divorce his wife!

Spencer will be the first person she’ll want to check in with, since she’s very worried about her family being in danger from Victor Cassadine (Charles Shaughnessy)! General Hospital viewers will recall that she was advised that Victor had gotten an immunity deal from the WSB and was living in Port Charles by one of the guards that she and Martin had when they were staying in the safe house, where they had been for several months.

General Hospital Spoilers – Laura Spencer Demands Answers, But They Can Wait Till They Get Home

General Hospital viewers can imagine that when Laura comes into Kelly’s she’ll tell Spencer to go ahead and do his work as he’s supposed to and come and talk to her on his break, and she’ll order something to nibble on while they’re having their conversation. She’ll let him know that Kevin had caught him up on most of what Spencer has been up to, and while she’s very disappointed in what led up to him working at Kelly’s and living with Kevin, she’s proud that he’s working at a job.