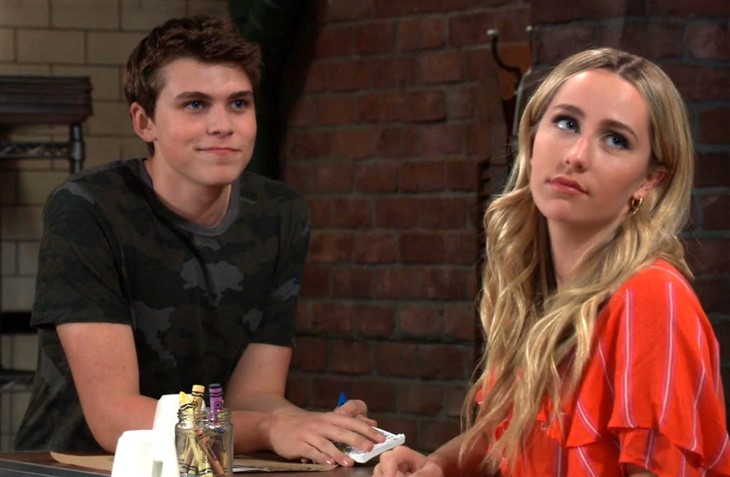 General Hospital (GH) spoilers reveal that during the week of December 27, Josslyn Jacks (Eden McCoy) cancels her plans with Cameron Webber (William Lipton). Esme Prince (Avery Kristen Pohl) will no doubt find out about the cancellation, which she uses as an opening. Esme will likely target Cameron, who could be feeling lonely, disappointed, or even rejected.

GH spoilers reveal that Carly Corinthos (Laura Wright) is about to learn a bombshell. Carly will discover the real reason why Sonny Corinthos (Maurice Benard) seemingly defends Nina Reeves (Cynthia Watros). When Carly learns the bombshell, Sonny will try to explain but it could still cause a relationship crisis. When Carly’s life comes crashing down again, Josslyn will want to be there to support her mom.

On Thursday, December 30, Josslyn will have plans with Cameron. Just like how they keep getting interrupted when alone, something will happen with their date. Josslyn cancels her plans with Cameron. Since it happens around the time that the truth about Sonny and Nina is supposed to come out, Josslyn probably cancels for family reasons. Josslyn will want to be there to support her mother as she reels over this new bombshell.

General Hospital spoilers reveal that Cameron could be vulnerable at the time that Josslyn cancels their plans. This is exactly the opening that Esme is looking for. Esme has already tried to get between Cameron and Josslyn. Esme befriended Cameron, who sometimes seems sympathetic to her. There was also the time when Esme used Josslyn’s insecurities to further her scheme. Each time that Esme shows up, Josslyn and Cameron seem to have different opinions of the villain.

Cameron could be feeling lonely or even rejected by Josslyn, depending on what she tells him about canceling. Cameron could be vulnerable and isn’t always street smart, so he could definitely fall for Esme’s “friendship.”

Esme definitely has no shame and nothing seems to cross a line with her. According to Soap Opera Digest, Esme will continue to try and destroy Josslyn, Cameron, and Trina Robinson (Sydney Makayla). One way Esme could do that is by tricking Cameron into a compromising position. Perhaps she will even slip Cameron alcohol or drugs.

Of course, Esme will want Josslyn to walk in on this “betrayal” – whether it actually happens or just looks like it. Will Esme destroy Cameron and Josslyn’s relationship and if so, how does she justify (or deny) this to Spencer?