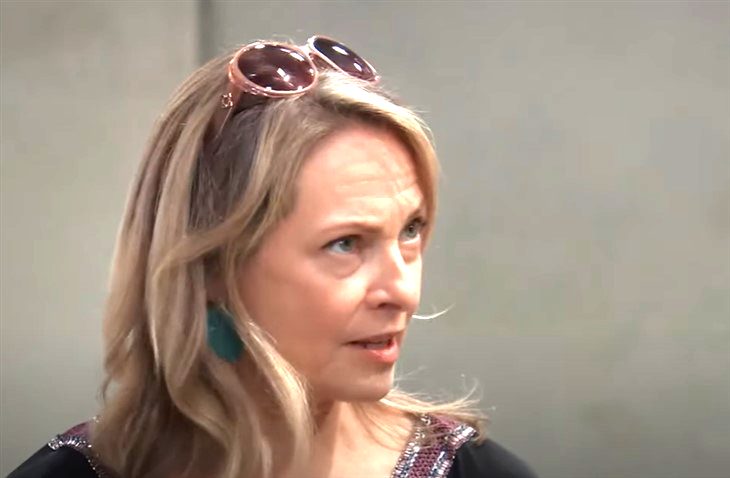 GH spoilers reveal that Gladys has been a thorn in Brook Lynn’s side ever since she found out about the paternity secret. Of course, Gladys just thinks that Brook Lynn is lying about the father of Bailey Quartermaine (Harper and Scarlett Bloom). Gladys has no idea that Bailey is actually Maxie Jones’ (Kirsten Storms) “kidnapped” daughter, Louise “Lou” August.

Brook Lynn has tried to keep Gladys quiet, but she keeps pushing for more. This led to Maxie suggesting that they hire Kip to be Bailey’s baby daddy, who tried to intimidate Gladys.

The plan seemed to work despite Austin Gatlin-Holt (Roger Howarth) seeing Maxie give Kip a wad of cash. What blows Brook Lynn and Maxie’s newest plan is the Photo Ark event at Ava Jerome Cassadine’s (Maura West) art gallery. Kip is there working as a waiter when Gladys recognizes him. Gladys confronts Kip, who tries to cover by claiming he’s just there to keep an eye on her. Gladys isn’t buying the story and then someone else identities Kip as an actor.

General Hospital spoilers reveal that Gladys figures out Kip is an actor when someone else blurts it out. As Burroughs explained to Soap Opera Digest,

“‘Hey, Kip! So-and-so got sick, you’re going to go on as Nathan Detroit [from Guys and Dolls] tonight!’”

That is when the whole wiseguy baby daddy facade crumbles. Next, Gladys goes to tell Brook Lynn that she wants controlling shares of Deception. Of course, Brook Lynn tells her no but offers her a paid vacation and a raise, both of which Gladys rejects. When she doesn’t get what she wants, Gladys makes good on her threat.

Gladys pulls out her phone in front of Brook Lynn and dials Valentin’s number. Even though this could be the end of Brook Lynn and Maxie’s baby lie, don’t count them out just yet. Brook Lynn scrambles to figure out how to do damage control and it just might involve Harrison Chase (Josh Swickard). However, will the new plan work?

What do you think is going to happen when Gladys calls Valentin? How will Brook Lynn convince Chase to play baby daddy #3? When will the truth about “Bailey” being baby Lou finally come out?