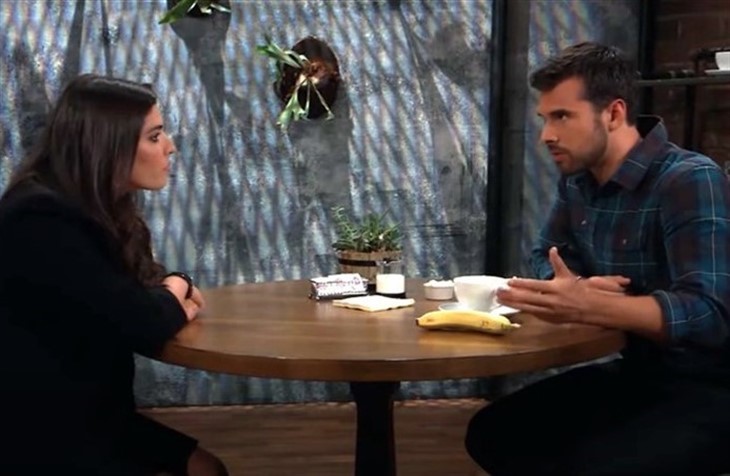 General Hospital spoilers reveal that Brook Lynn Quartermaine (Amanda Setton) tried to get Gladys Corbin (Bonnie Burroughs) to back off by hiring an actor. However, it won’t work and Harrison Chase (Josh Swickard) could step in. Chase will make the third man Brook Lynn claims is the father of her fake baby. When people start asking Chase questions, the scheme could quickly unravel.

GH spoilers reveal that Brook Lynn and Maxie Jones (Kirsten Storms) never imagined their baby swap plot would get so complicated. Neither of them imagined that Brook Lynn would still have Louise “Lou” August aka Bailey Quartermaine (Harper and Scarlett Bloom) this long, either. The latest complication is Gladys, who will soon find out that Brook Lynn’s new baby daddy is an actor.

As fans saw on Wednesday’s episode, the actor hurt his hand while trying to intimate Gladys. Maxie handed him some money to cover the medical expenses. Austin Gatlin-Holt (Roger Howarth) just happened to see the exchange.

General Hospital spoilers reveal that when Gladys figures out that she’s been conned, Brook Lynn will get a new demand. If Brook Lynn doesn’t give Gladys shares of Deception, then Valentin Cassadine (James Patrick Stuart) will find out the truth. However, there is no way that Brook Lynn can pull this off. Plus, Gladys is never going to stop with her demands if she keeps getting what she wants.

Gladys does make a phone call to Valentin. Plus, Austin stops by Valentin’s hospital room. With a smirk on his face, Austin is looking forward to Valentin learning the truth about Brook Lynn. However, Gladys and Austin don’t have the full story and their actions could endanger Maxie and the baby.

It is teased that Chase will step in to help Brook Lynn. At first, he will question her honestly. However, once he realizes why Brook Lynn went to such extremes, he might agree to help. Then, things get complicated when people start asking questions.

Remember, Chase blasted Michael Corinthos (Chad Duell) and Willow Tait (Katelyn MacMullen) for their affair while he was on his deathbed. Chase has always been considered the good guy, so how will he explain being the real father of Brook Lynn’s baby when he went to so much trouble to slam Michael and Willow? How will Chase explain why he allowed another man to raise his child? This should get very messy and complicated.

Let us know your thoughts on the storyline. What do you think is going to happen next?

Days Of Our Lives Spoilers: The Devil Takes Over Susan Banks